Why is Ukraine incapable of fulfilling the demands of Füle’s List? An analysis of state anticorruption policy

Štefan Füle, European Commissioner for Enlargement and European Neighbourhood Policy, paid an official visit to Kyiv on February 7 to discuss one topic: whether Ukraine is ready to sign the EU Association Agreement. After the visit, the European Union did not make a formal statement, but 19 strict demands for Ukraine, also known as the Füle’s List, appeared in Ukrainian media. It is not an official document; however, both sides agree that it will be used for assessing Ukraine’s progress in implementing sectoral reforms. In particular, the Füle’s List provides for monitoring of the strength and efficacy of Ukraine’s anticorruption campaign. 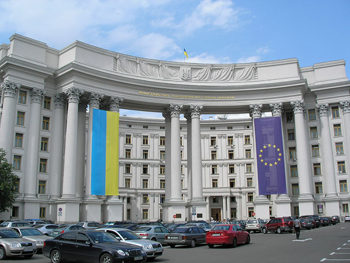 The Ministry of Foreign Affairs of Ukraine located in the Ukrainian capital Kiev.

Authorities reacted to the list by putting 10 of 19 demands on their agenda of priorities. The government also declared its readiness to implement the fourth part of the Füle’s list (consultations and cooperation with Brussels and opposition) and half of the third part that deals with reforms. The most attention is on the reform of the state finances administration system, international aid distribution, and economic and business society preparations for the possible admittance to the free trade zone with EU. Yet the Cabinet of Ministers Anticorruption Plan consists only of one item – the support of the draft law dealing with some new articles on bribing to be added to the Criminal Code

That leaves open the question, is Ukraine too corrupt to have the ability to fulfill the EU demands?

The role of executors of state anticorruption policy was taken up by NGOs who can provide civic control over public procurements. That leads to the prevention of theft; legal consultancy for victims of corruption; advocacy of legislative regulations aimed at developing ideas for proper governance in Ukraine, etc. However, the level of the responsible state bodies’ reaction for the facts provided by civic controllers remains extremely low. The law-enforcement agencies only reluctantly open criminal cases based upon civic activists’ and journalists’ reports.

This all means that Ukraine’s implementation of the anticorruption demands listed by Füle might never make it off the paper it was written on. Either way, we recommend a number of specific steps.