To ring in International Women’s Day on 8 March, Transparency International is featuring woman corruption fighters around the world. Evronia Azer is one of these women. 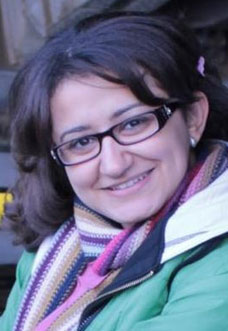 The coastal city of Alexandria has no shortage of everyday heroes. The activists that do not grace newspaper headlines but just go about their insistent struggle for justice on the ground are those who truly triggered the Egyptian revolution.

Alexandria is also a scarred metropolis. Khaled Said, a young middle class man, was horrifically tortured by the police in June 2010 and the gruesome video circulated rapidly on social media.

A Facebook group called We are All Khaled Said now boasting nearly 3 million members was instrumental in the organising of the January 25th revolution to coincide with National Police Day in order to protest against the brutality inflicted on a large disaffected youth with little prospects for jobs or a future.

Evronia Azer is a founding member of the group No Military Trials for Civilians whose mandate is to demand transparency in military trials for citizens arrested in the transition phase from the ousting of former President Hosni Mubarak until the election of Mohamed Morsi. Yet the arrests even under the new president continue. Defendants in the military trials that are closed to the public often have no access to counsel of their own choosing.

In Alexandria, we were in a protest in July 2011 and 14 people were arrested and faced military trial. We felt there was an urgent need to form a group in Alexandria and within 24 hours we formed one. Then we started receiving information from people who faced military trials all over Egypt since 25 January 2011 until today.

From her experience of going to courts Azer says “many families mentioned that they had to pay prison officers in order to make them facilitate entrance to visit their sons or daughters inside”.

Azer is a software engineer by day yet manages to coordinate  the Hotline for the No Mil Trials group with other volunteers . She explains “we receive calls from detainees’ families and we meet them and film their testimonials and talk to the lawyer about the case and see what help we can provide”. She adds that

we work to expose the procedures of these trials, which are extremely unfair. Detainees are sentenced to lengthy sentences in a matter of a couple of days, without the ability to tell their families.

The space of civil society groups in Egypt to operate freely continues to shrink. Just this week, the trial of 43 defendants accused of illegally receiving foreign funds for their non-governmental organisations (NGOs) resumes. Further, a new draft law about restricting the scope of NGO activities is in the final stages of implementation. Both have been widely criticised by local and international groups.

Yet, the work of No Mil Trials with many of the group members having been beaten and arrested themselves remains strong as the campaign commemorated its second year anniversary last week. Azer’s steely determination is evident when she says

on the personal level, it is sometimes really hard to handle the trauma of families who have their sons sentenced to long years in prison without a fair trial but we will continue fighting until we end military trials for civilians in Egypt.