In July 2012 Transparency International published its report analysing the transparency of reporting on a range of anticorruption measures among the 105 largest publicly listed multinational companies.

Assessing transparency in corporate reporting has been used by Transparency International for several years now and research for the next report scheduled for 2014 will start soon. The growth in the approach’s complexity, scope and impact over the past years has provided the impetus for it to be replicated in different national contexts. 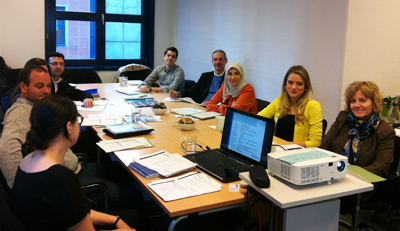 Last week, a number of Transparency International chapters came together in Berlin to grasp the essence of the research methodology and learn how to scale and replicate the study in their countries. Barbara Kowalczyk-Hoyer, the lead-researcher of the 2012 report introduced chapters to the methodology and helped with adapting it to their local needs.

Several chapters will be applying these important tools and adapting the research design in Argentina, Kuwait, Lithuania, Greece, Italy, Hungary and Norway.

Encouraging was the example of TI Sweden who have just published their Transparency in Corporate Reporting – A Study of the 20 Largest Companies in Sweden. Emma Hasslev, the researcher of the Swedish report was present at workshop and shared her experience stressing that the approach and the methodology of the report allows for a flexible adaptation.

For instance, while the Argentinean chapter is thinking about assessing transparency within the waste industry the Lithuanian chapter is aiming to evaluate the largest companies disregarding the sector they operate in.

The corporate world thrives on competition and having an edge in the market hence it is critical to take advantage of this and help the largest corporations become the role models in setting and demonstrating the good reporting standards. This leads to an increase in corporate transparency, accountability and trust in the private sector.

Focusing on and raising standards of anti-corruption, organizational and country-by-country reporting offers new possibilities to engage with private companies closer than ever before.

An important caveat is that we’re not looking at a ‘naming and shaming’ exercise. We are ready to help and assist companies around the world to improve their corporate reporting and become even more committed players in the fight against corruption.