“But are you a real doctor?” Shortcut doctorates in Germany

Last month, German Education Minister Annette Schavan resigned after a university revoked her doctorate due to allegations of plagiarism. Only two years ago, the then-Minister of Defence, Karl-Theodor zu Guttenberg also stepped down for the same reasons. These two high-level cases, in addition to numerous other plagiarism cases involving German politicians (such as Members of the European Parliament Silvana Koch-Mehrin and Jorgo Chatzimarkakis), shine a light on dishonest practices in German academia. 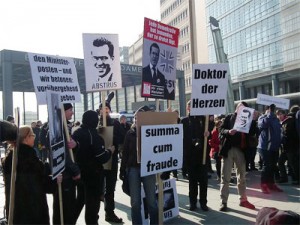 In Germany, doctoral degrees take several years and require a tremendous amount of work but are relatively affordable (no fees are charged for doctoral programs at state universities for the first six semesters). They are seen as important status symbols, embellishing even national ID cards. Moreover, studies have shown that executives with a doctoral degree can earn up to €13,000 (US$16,850) more per year than their colleagues without one. In short, there are many incentives for individuals to cut corners to attain a doctorate.

Some doctoral candidates are lured into the attractive promises of doctoral consultancy firms. In return for hefty fees, these firms, which often operate in both legal and academic grey zones, offer services that vary from drafting concepts and outlines to assisting in locating ghostwriters.

In recent years, one of these firms has come under scrutiny for allegations of bribery. In 2009 it was revealed that the former “Institut für Wissenschaftsberatung” (“Institute for Academic Consultancy”) had allegedly bribed dozens of professors in order to help their clients. According to Spiegel Online, the company advertised that it would help clients find dissertation topics as well as a suitable professor to oversee their work, for which it charged as much as €20,000 (US$25,930), with a commission of €4,000 (US$5,185) going to the professors. But as professors are supposed to be overseeing PhD candidates as part of their job anyway, this payment constitutes “getting paid twice for the same job”.

If the doctoral process appears too tedious and daunting for some, there are always honorary doctorates and professorships. While these titles awarded by universities should be on the basis of merit and outstanding achievement, perhaps a generous sponsor can suffice. Margarita Mathiopoulos, a German entrepreneur whose actual doctorate has now also been revoked for plagiarism, was awarded an honorary professorship from the Braunschweig University of Technology in 1995. This also happened to coincide with a donation of DM250,000 (ca. €128,000, US$167,000) given by her employer, Norddeutsche Landesbank, to the university’s 250th anniversary celebration. [Editor’s note, 27 March: this paragraph revised to note Mathiopoulos received an honorary professorship, not doctorate]

These cases demonstrate a lack of academic honesty and a lax attitude by supervisors vis-à-vis standards in the doctoral process. It also leads to the very worrying fact that universities may be awarding degrees to unqualified candidates.

With the advent of crowdsourcing projects like VroniPlag Wiki and GuttenbergPlag Wiki, the German online community is doing its part in detecting the bad apples in the German academic elite. To date, these projects have examined nearly 40 dissertations, of which eight have led to revoked doctoral degrees (including the aforementioned cases). In addition to sparking nationwide discussions on academic integrity, VroniPlag Wiki was also awarded the Zedler Prize for Free Knowledge by the German Wikimedia Foundation in 2012.

It is important to note that these violations of standards of academic integrity only affect a small percentage of German doctoral degrees. But the recent scandals have raised public awareness, directing the spotlight at German universities.

Therefore, it is up to universities to foster a climate of academic rigor and integrity, of openness and transparency. German universities should adopt obligatory doctoral courses on scientific methodology and make use of anti-plagiarism tools, practices already commonplace at British and US universities. German parliamentarians have also proposed a number of possible remedies such as a national plagiarism assessment system or even removing doctoral degrees from identity cards to reduce associations of prestige. Lastly, it is important to emphasise that higher education authorities must also make sure that those who do act unlawfully are held to account.

If violations of academic integrity go unimpeded they could cause permanent damage to German academia and undermine the reputation of its universities. Moreover, it would weaken the credibility of academic degrees and the valuable efforts of honest students. In other words, a title, even if well-deserved, would cease to be a title.

This blog post contains contributions from Sebastian Wolf, Transparency International Germany, who has authored for the Global Corruption Report on academic integrity in Germany.

What is your reaction to these reports?

What can universities do to ensure their students uphold academic standards?