Armenia: Fighting back at the ballot box

8 April 2013 in Europe and Central Asia, Politics and government

On March 15th the Supreme Court in Armenia annulled the election results from Precinct No. 17/5 in Artashat, where I spent an unforgettable day in mid-February watching ballots being stuffed while I was physically pinned to a wall by a group of thugs. I never thought such overt cheating like ballot stuffing would happen. After it all occurred, I never dreamed that we would get the results of the precinct disqualified. 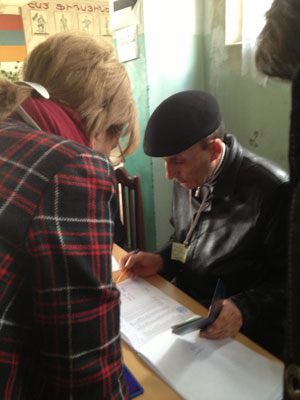 I wish I could say that the state moved quickly to act against the perpetrators; unfortunately, in the month after I was assaulted physically, I faced further pressure from the authorities to withdraw my evidence. It was a personal education in politics on the frontier and one that is still going on.

I am 21 years old and come from Los Angeles, California. I had come to Armenia as part of the Birthright Armenia program – which sponsors young people with Armenian roots to visit the homeland of their grandparents.  I chose the internship at Transparency International Anti-Corruption Center (TI AC) because I wanted to work within the civil society sphere in my homeland. My goal was to have a better understanding of the challenges the democratic process in Armenia faces. I wanted to know how these challenges affect the people and what steps the citizens of Armenia are ready to make in order to institute useful change.

The election monitoring was an eye opener.

According to the final results published by the Armenian Central Electoral Committee, the winner of the general elections on 18 February was the incumbent president Serzh Sargsyan with 58 per cent of the votes. Raffi Hovhannisyan, the nearest opposition candidate, received 37 percent of votes.

But this didn’t tell the full story. Across the country there were reports of voting violations, none perhaps as blatant as what I had experienced. I’m not sure the final result would have been different if there weren’t any electoral fraud but the fact that it could happen in plain view was disturbing.

Precinct 17/05 is located in the town of Artashat, which has a voting population of over 2,000. The polling station was in an elementary school. The poll workers were mostly teachers from the school and as such they knew almost all the voters. The officials sat behind a table next to a large plastic, see-through voting box that was sealed on two sides.

I arrived at the polling station with my partner at 8.00am on a chilly morning as the first voters were filing in. It soon became clear that this was not going to be a quiet day. I saw people coming to vote twice, some with documents that didn’t match the register, some who had clearly been in before. I tried to point this out but was ignored.

But even though votes were being tampered with and cheating was happening, it clearly wasn’t happening fast enough for some, perhaps because I kept making a fuss. At two-thirty a gang of about 25-30 men burst into the room. The rules are that there should be no more than 15 voters at any given time. I tried to object but was immediately held tight by my wrists and pushed up against the wall. I couldn’t take my phone out to catch what happened next on film.

The men cut open the ballot box and stuffed in about 400-500 ballots, then tried to reseal it. No one complained, even the proxies from other political parties remained silent. The poll workers and even the Secretary of the electoral commission helped in the efforts by assisting with the opening of the ballot box.

I started calling reporters and the police. When the police came they were accompanied by the town mayor, whose son had been the one to hold me against the wall. No one owned up to any irregularities. When the votes were being counted, the election official made a big show of trying to open the box to prove that the seals were tight. It was obvious that hundreds of ballots had been put in the box; the tally of votes counted did not match the tally of registered voters.

I was so shocked I recorded my experiences when I got back to the office:

After the elections, the Special Investigative Service of Armenia (SIS) lodged a criminal proceeding to investigate the irregularities at the polling station. I was questioned and incredibly put under pressure to change my testimony, as if the SIS didn’t want to discover any wrongdoing. At one stage the head of the SIS violently seized the tape recorder and tried to stop my lawyer, Tigran Yegoryan, from recording our conversation. Later, SIS representatives continued to use scare tactics and intimidation to try force me and the lawyers from the Europe in Law Association and Transparency International Anticorruption Center to drop our complaint.

That didn’t work. The Europe in Law Association and Transparency International Anticorruption Center issued a statement to the press and electronic media deploring the unlawful actions of the investigators of the Special Investigative Service and particularly those of Andranik Mirzoyan, the Head of the Special Investigative Service concerning investigation of the cases on election violations. 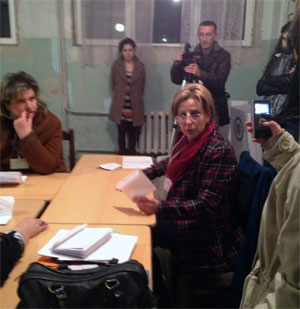 The SIS hit back with a counter claim and TI AC applied to the Ethics Commission for High-Ranking Officials. However, there is one piece of good news. Our media efforts appear to have paid off as far as the ballot stuffing was concerned. The elections in the precinct No.17/5 were annulled and all the materials concerning the case were sent to Prosecutor’s Office.

So what did I learn from all of this?  I learned that Post-Soviet nations like Armenia have a long way to go in regards to civil society, democratic development and human rights. It is easy to read about the challenges such nations face, but to experience them sheds light on the realities of the country. Even though corruption and fraudulent actions are rapid within the government and the economic giants within Armenia, the people are ready to “take back their vote.”

I do believe with the help of organizations like Transparency International and the mobilization of citizens, Armenia can change for the better, even if it is step-by-step each year. I hope by the next elections, overt corruption will be obsolete and that more people will be willing to be observers and take a stand against any corruption they see.