Fake bomb detectors and the latest casualties of corruption

24 April 2013 in Defence and Security, Poverty and development, Private sector

This article was first published on Trustlaw

Yesterday, the British ‘businessman’ James McCormick was found guilty of fraud for selling millions of pounds worth of utterly useless bomb detectors to governments around the world, including a major contract in Iraq. A whistleblower alleges that McCormick paid millions of pounds in bribes to at least 15 senior Iraqi officials. This resulted in over 6,000 fake bomb detectors sold to the country, hundreds of people killed because of them, and McCormick pocketing £55 million from the Iraqi government for the job. This is less than what the US – the single largest country donor in Iraq – has allocated for primary healthcare in the country for 2012 through its Economic Support Fund. 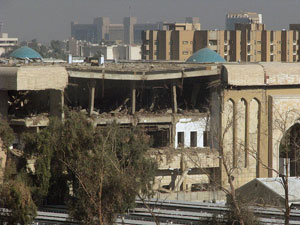 But this wasn’t just a rogue greedy individual—the responsibility for stopping such activity is as international as the trade itself. Questions must also be asked about how a British man continued to sell these sham devices from the UK for so long. According to the Guardian, it took a full year for the devices to be banned from export after whistleblowers raised concerns to the UK Department of Business and the House of Commons Defence Select Committee. The Guardian also states that “consignments of the devices were once stopped at the UK border before being exported and officials queried whether export documents were required. The reason none were needed was they could find no functioning electronics inside [emphasis added].” In other words, the bomb detectors could have been replaced with coat hangers with no consequence.

These devices—which contain no functioning electronics—are believed to still be in use in Iraq. The Independent has identified a series of hotel bombings in January 2010 that killed 38 and injured 76 in which the bomb “detectors” were in use.  Bombings in Iraq are sadly a continuing phenomenon, 50 people were killed and hundreds injured in a wave of bombings prior to this month’s elections. The need for security devices and detection that works is crystal clear. The devices were also sold to police in Belgium, to protect hotels in Lebanon, for airport security in Pakistan, and in Georgia, Mexico, and Thailand.

The hundreds that are estimated to have died because of these useless devices are the most visible victims of this crime. But the impact of this type of systemic, high-level corruption extends beyond that immediate loss of life. A quick glance at the UNDP website for Iraq shows how bad services are for normal Iraqis: 75% identify poverty as the most pressing need; 20% of Iraqis cannot read or write; just 26% of the population has access to the public sewage network. Would those numbers, and lives, be different if that £55 million had been spent in a transparent way on education, infrastructure, and enterprise? How many lives could have been saved if the £55million the Iraqi government wasted were spent on effective bomb detection mechanisms?

A former employee of McCormick who blew the whistle about this scandal had qualms when he realised the ineffectiveness of the devices and took the case to the authorities. As early as 2010, the Inspector General of the Iraqi Interior Ministry, al-Turehi, submitted a report to the Ministry of Interior and the parliamentary integrity commission. Iraqi MP Haneen Kado raised questions about the case and the corruption surrounding it.  McCormick was arrested following an investigation by the Chief Constable of Avon and Somerset after reports of the false devices surfaced in the media.

As heart-breaking and mind-boggling as this story is, it also highlights the importance of those working to fight corruption—whistleblowers, members of anti-corruption institutions, and the news media. When individuals with allegations of corruption and fraud have the courage to bring cases to light, the response must be fast and effective. As the whistleblower and McCormick’s former employee told the BBC: “Lives could have been saved.”