No one has all the answers: the positive role of civil society in Russia

6 May 2013 in Civil society, Europe and Central Asia, Politics and government

Last week the Moscow City Prosecutor’s Office sent to Transparency International Russia an official warning to register as a foreign agent. This came because the Prosecutor said TI Russia was shaping public opinion about government policies in the field of law enforcement and had an impact on the adoption by State institutions of laws and regulations.

In Russian, the term foreign agent is synonymous with spy and would mean that TI-Russia is heavily influenced from abroad. We would beg to differ.

Like the more than 100 other Transparency International chapters around the world, TI-Russia fights corruption. That is not a political activity per se, rather a public good, but without doubt it requires interactions with politicians because stopping corruption means introducing sound policies.

In order to stop corruption you need the appropriate legal framework and strong institutions; to ensure that these are in place requires engaging with the political process to develop the policies that then become laws; it also requires a civil society engaged with the process to monitor that these laws are implemented.

TI-Russia, like every member of TI movement, does not enter politics to make this happen. It doesn’t field or fund candidates at elections, and it does not endorse one political party over another. The Transparency International movement mission statement makes it perfectly clear that we fight corruption using non-partisan, non-political activities.

We do this in many different ways.

First and foremost we need to convince people that corruption hurts all of us, stifles economic activity and disadvantages the weakest members of society. We hold education workshops, we bring young people together to discuss solutions and we have even been known to use cartoon characters that show people how to say no to bribes.

In Senegal our chapter Forum Civil believes the creation of an anti-corruption commission will help. In Brazil, our contact group Amarribo joined with other civil society organisations to push parliament to pass a law that barred people with criminal records standing for public office.

In the UK our chapter believed that fighting corruption required a specific law in parliament detailing what was considered a bribe in public procurement and business, and thus was born the Bribery Act of 2011. The UK government invited TI-UK, along with many other stakeholders, to give its opinion on the legislation. The law was passed because people were fed up with the number of scandals that tarnished UK business operations around the world. 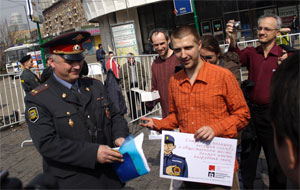 According to Russia’s new police law, all policemen on duty have to wear badges. They strip away the anonymity of cops, and could help the citizen to avoid ill-treatment. On 22  April 2012  journalists, civic activists and TI Russia employees checked if police officers in more than ten Russian cities have badges on their uniforms.

In 2010 when the Russian government posted the draft police reform law online for citizens and non-governmental organisations to comment, TI Russia submitted five suggestions, two of which were incorporated into the final law including the provision for police officers to wear badges.

We are not unique in what we do. Ten years ago, the United Nations adopted the Convention against Corruption (UNCAC), the result of 10 years of lobbying efforts to have an international blueprint that describes what governments need to have in place to fight corruption. Russia is a signatory to the UNCAC since 2003.

In 1994 the OECD adopted its Convention against Foreign Bribery, also the result of many years of work conducted by civil society, including Transparency International, to make, among other things, bribing foreign officials illegal. Russia has also signed on to this.

This week Transparency International Russia will argue against the warning levelled at it by the Moscow City Prosecutors Office and try to explain the positive role of civil society in the fight against corruption.

We hope that the Russian government, which is pursuing policies to stifle the voice of civil society, comes to realise that this is counter-productive and will reverse its position.

It is worth remembering, in this context, that laws that today guarantee civil liberties, human rights, safe working conditions and equal voting rights came about because people – civil society — challenged the status quo. We’ll keep working together with civil society to shape, together with governments, a fairer world.