10 May 2013 in Europe and Central Asia, Politics and government, Region

The Czech parliament is currently considering a new law to increase transparency in how political parties are funded. This should have been a reason to celebrate, given that Transparency International Czech Republic and other non-governmental organisations have been working on this for the past two years. But the law could and should have been so much better. That’s why I am not sure whether to call this a success for civil society.

Two years ago GRECO (Group of States against Corruption under Council of Europe) assessed the legislation on political party funding in the Czech Republic and found it weak and ineffective. We and other NGOs in the country agreed. In 2012 we published an in-depth study of the key institutions in the Czech Republic, which identified party funding as one of the main challenges in the country. All allegations and suspicions of “black” unrecorded funding of both major political parties remained uninvestigated.

The problems are pretty basic. It’s very difficult for anyone to find out who gives what and how much to which political parties. If a person wants to find out how a political party is funded they have to book a visit to the Czech Parliament to read a printed document that the parties are supposed to submit annually. They can’t go online and they can’t go directly to the party. 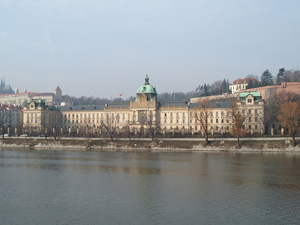 The Czech Parliament in Prague

For the past two years there have been intensive debates organised by NGOs, including Transparency International Czech Republic, to discuss proposals for new legislation. We hosted international seminars and round tables to assess different national models. We invited experts from the United Kingdom, Latvia and the US to share their experiences both on what regulations are necessary and on transparency principles.

As a result the Czech Ministry of Interior prepared an excellent draft new law on political parties’ financing, which met almost all the Transparency International and GRECO recommendations.

In the political process, however, the draft was drastically changed and last week the Czech government submitted a severely watered down version to Parliament.

But, and it is a pretty big but, there is no independent supervision or control of this information and there are also no sanctions for parties who do not comply with the law. Basically, the parties can write what they want and no one has the authority to question it.

Both the governing coalition and the opposition decided to reject the original legislation put forward by the Ministry of the Interior that recommended the establishment of a special office to supervise political parties. They also rejected the ban – supported by NGOs – on donations from companies.

So, how to assess the final law? Should civil society be happy that the level of transparency of political parties’ financing will be increased? Or is the draft a failure of two years of advocacy work? Should we advocate against adopting this law and advocate for a better draft?

Reluctantly, we have to admit that the draft law is a step forward but not the leap we wanted. That means we will continue our efforts to advocate for further amendments to the law and we will make use of the new levels of transparency to monitor political parties’ financing as much as we can. However, the corruption risks associated with political party financing have not gone away – which is a great disappointment.