An anti-corruption reform agenda for Bulgaria

The immediate reason for the protests against the Bulgarian government, which started in mid-June and are still going on, was the appointment  of a person with a doubtful reputation, very low integrity and an obvious lack of competence in the eyes of public perception to head the state agency for national security.

The lack of transparent and open procedures during this nomination process, in addition to the total absence of any kind of public discussion, raised serious public concerns.  This triggered an immediate reaction – the second blast of protests this year – which only goes to show thatBulgariahas developed a civil society that now rejects bad governance and the failure by those in power to observe the core principles of transparency, integrity and accountability.

Behind this particular case of misuse of power, the public protests are a result of the longstanding realities of the effects of living with weakened public institutions that serve as a democratic facade for a system of governance that allows illegitimate oligarchic, vested interests to control institutional decision making. 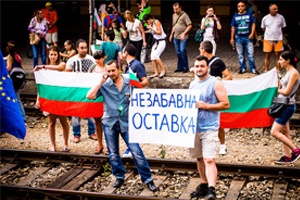 The people out on the streets are not organised under a single banner and are largely made up of ordinary citizens joining a few recognisable civil society groups. But they have a strong common interest:  they are fed up that the country’s elites – in politics but also in business – are getting away with impunity for corruption.

What the demonstrators lack at the moment is a clear agenda for what should come next if the protests end up bringing down the current government.

On the issue of fighting corruption, this is what we at Transparency International Bulgaria would suggest.

The electoral process inBulgaria, even after 23 years have passed since the beginning of the transition to democracy is still lagging behind established standards for fair, transparent and democratic elections. The inefficient electoral administration, the lack of transparency in the work of the responsible institutions at national and local level, and the lack of integrity by the political parties are still typical of the electoral process in the country.

This leads to declining confidence in political institutions and narrows the opportunities for sustainable political and economic development of the country. Despite all efforts and the improvements in the legal framework, political party financing is still not transparent. Only 10.6 per cent of Bulgarians believe that the transparency during the last election campaign was sufficient.

2. Break down the crony networks through transparent registers of interests

In the latest Global Corruption Barometer 2013, 59 per cent of Bulgarians said that the government is run by a few large interests who look out for themselves. If there was greater transparency in the relations between politicians and business, this would help regain trust. People would know whether politicians are making decisions for the right reasons or because they benefit, even if indirectly, through party contributions or other illegitimate sources.

3. Regain the citizens’ trust in the judiciary

86 per cent of Bulgarians think the judiciary in the country is the most corrupt institution. If citizens do not think justice is fair then what is the point of playing by the rules? The biggest weakness of the system is the lack of actual results in the fight against corruption, according to our latest National Integrity System study. There should be significant improvement in the area of transparency and personal integrity in order to regain citizens’ trust. The judiciary is widely considered to be among the most problematic branches of power in the Bulgarian public institutional system, demanding in-depth reform.

If these reforms are not started by the government, it is likely that the protests will continue, regardless of who is in power. The continued presence of protesters in the streets should act as a wake-up call.