US$1 million for reforestation missing in Peru

Tracking public money in Peru can feel like chasing smoke and mirrors. The state often keeps a lid on official documents, meaning trails can lead to dead-ends. In this case the information was not missing, but some of it turned out to be false. 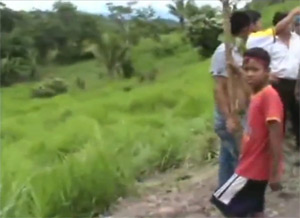 Until recently, the city of Pajarillo was known for illegal trade in coca – the plant used to make cocaine. In May 2011, in an attempt to create alternative sources of livelihood, DEVIDA (the National Commission for Development and Life without Drugs) embarked on a reforestation project covering 5,000 acres of reclaimed land. The project was worth a total of US$1 million, due to be paid in three instalments to local government officials.

Last month the final payment exited DEVIDA’s coffers. César Cárdenas, a journalist for Poder Ciudadano, Proética’s online TV show, visited Pajarillo to see the results. He found not one acre of reforested land. The only evidence of the project was a batch of abandoned seedlings in a nearby nursery.

Local people interviewed were well aware of what had been going on. “It’s common knowledge that a number of people who have never worked this land have been paid by the project,” one man said resignedly.

Cárdenas’ investigations led him to the mayor of the province of Mariscal Caceres. His office received the US$1 million, which should have been used to hire technicians to reforest the land. Rather than employing qualified staff, the mayor reportedly sent personnel from his office to plant a small fraction of the assigned trees.

Inquiries suggest that a supervisor from DEVIDA was complicit in preparing a false evaluation report, allegedly approving the next payment of funds on the grounds that the project had met its goals. The case is now being investigated by the local public prosecutor.

Proética’s work on climate finance began precisely because of risks like these. A UN-initiated scheme known as REDD+ (Reducing Emissions through Deforestation and Forest Degradation) holds the potential to help reduce carbon emissions, by offering forest-rich countries like Peru financial incentives to preserve and grow forests. Peru is believed to be receiving nearly US$60 million in REDD money.

Cases like the Mariscal Caceres one suggest that more must be done to ensure that funds destined for reforestation are put to good use. They also lend strength to our main message: corruption can and will undermine climate finance unless the checks and balances are in place to make sure that it doesn’t.

Preventing this from happening will require lifting information out of the shadows, through increased commitments to transparency. We also need independent bodies watching over this information to verify it. And it’s critical that we have an active citizenry that will hold officials to account for their decisions. This is what Transparency International’s climate team are striving for – from Mexico to the Maldives, as well as on the international stage.