Venezuela: corruption is ruining the country

Recently Nicolás Maduro, President of Venezuela, announced he would request decree powers to “vaccinate Venezuela’s democracy and public sector” against corruption. The government’s initiative to address this issue is crucial, but increasing the executive’s power will not eradicate corruption. 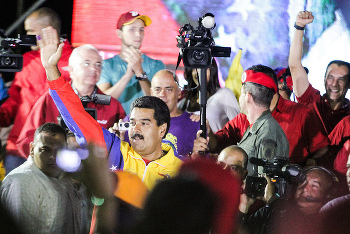 If the presidency aims to succeed in the fight against corruption, it should foster transparency at all levels of government, including the executive level, especially regarding the state budget and government entities and ensure that the judiciary is independent. This would be more productive than calling for special powers. The most effective remedy is improving access to information, increasing accountability, and promoting a clear separation of powers.

With the request for special powers the President seems to forget that he is actually the one responsible, directly or indirectly through his ministries, for the management and allocation of most state resources. Ultimately, he is responsible for the reputation the government has in the fight against corruption. The scorecard is not good.

When asked in the latest Global Corruption Barometer survey, 63 per cent of Venezuelans reported corruption has increased during the past year. Respondents said that the most corrupt institutions were the police (83 per cent), public officials and civil servants (79 per cent), and political parties (77 per cent).

The truth is that the abuse of public resources by the powerful is a common practice in our country and they do this without fear of getting caught. In Venezuela, even though it is obvious who is corrupt, these powerful people keep their position and no investigations are carried out.

Maduro’s solution is also to toughen sentences. But what sense does this make if judges are not going to implement them against the corrupt? If arbiters of power are not independent, just like referees in a football, the game is compromised.

Publicly proclaiming a war on corruption as a way of getting votes has been a common practice since 1958, but it has not yet resulted in more efficient policies. Why should we again believe in magic solutions, such as granting presidential decree powers? This, as I have argued above, is not going to guarantee change.

Civil society should demand the corrupt be brought to justice through the courts. They should build institutions by voting for honest candidates and condemning corruption wherever they see it. Under these circumstances, extra presidential powers are redundant and we would have a fighting chance of reducing corruption.