Lights, camera – was there G20 action?

So now that the G20 dust has settled and the media circus has dispersed, did the representatives of two-thirds of the global population make any meaningful decisions in St Petersburg?

The final St Petersburg G20 Leaders Declaration has 11 paragraphs devoted to corruption efforts. This greater visibility is welcome progress from the two sentences included in the 2011 Cannes G20 Communiqué. But do more words result in more action? 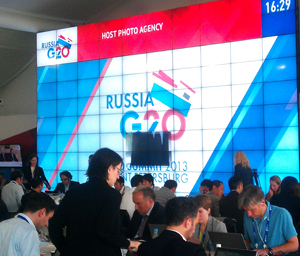 Renewed emphasis on tackling money laundering and a proposed alliance for fighting corruption in mass sporting events were two positives coming out of this year’s G20.

Understandably both journalists and leaders were preoccupied with discussions on the conflict in Syria. This may have muffled the fanfare owed to a number of positive steps forward:

So what was the biggest disappointment?

In a press conference, I asked whether the G20 leaders intended to build from the progress seen in the EU this year on extractives industry transparency with the adoption of new rules requiring oil, gas, mining and logging companies to disclose what they pay to governments around the world on a country-by-country basis. The response was disappointing: no, it was not discussed in any depth, and it was an issue that the G8 was dealing with since some G20 countries were uncomfortable with it.

Transparency International believes it is more than the job of eight nations to work on enhancing extractives industry transparency, not least since major players in this sector – including next year’s G20 hosts, Australia – are neither in the G8, nor covered by the EU legislation.

Now that the fanfare has faded, it is time for these commitments to be given life on a national level – and it is up to us to ensure governments realise we will hold them accountable for the pledges they make in international venues far from their citizens, the people who stand to win or lose most.