Elections in Honduras: is public security a priority for presidential candidates? 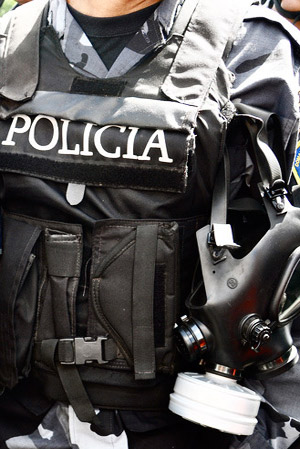 Cleaning up the justice system – including the military police – needs to be a campaign priority for presidential candidates ahead of the upcoming elections, writes our chapter in Honduras.

Honduras is one of the most insecure countries in the world with the highest murder rate per capita. According to the Observatory of Violence (Observatorio de la Violencia), 85.5 people per 100,000 were murdered in Honduras in 2012 – almost 20 per day. This high level of violence occurs in a country in which half the population live in extreme poverty. It comes as no surprise, therefore, to learn that this Central American country also suffers from high levels of corruption.

Corruption enables criminal organisations to infiltrate institutions responsible for public security and justice. As a consequence, these institutions not only fail to meet their objectives effectively, they also allow criminal acts to escape investigation so perpetrators go unpunished.

This is why, ahead of the upcoming presidential elections on 24 November, it was essential for citizens to hear the concrete plans of each candidate to improve this situation and create a safer country for all Hondurans.

The Peace and Justice Alliance (Alianza por la Paz y la Justicia) – of which our local chapter in Honduras, Asociación para una Sociedad más Justa, is a member – organised the forum Building a Political Consensus for Security and Justice in Honduras, which took place on 19 October this year.

Seven out of the eight presidential candidates took part in the event. Each of them had the opportunity to share their plans to improve government security with members of civil society, as well as representatives of political parties, international aid organisations and the Catholic and Evangelical churches.

Security matters to the candidates

Most of the candidates agreed that Honduras needs community policing. Only one remained in favour of the military police. Many of the candidates emphasised the importance of cleaning up the police as well as the wider justice system, and bringing an end to criminal networks and impunity. They all agreed that corruption is the currently the biggest problem facing the country.

Here are some brief highlights from the seven candidates’ plans:

Orle Solís (Christian Democrats) proposes the passing of a new law to regulate community policing and crime prevention, as well as to tackle poverty by creating more employment opportunities.

Romeo Vásquez (Honduran Patriotic Alliance) intends to implement an anti-crisis plan, bring about gang control, clean up the police force and restore order and security as part of his strategy to curb corruption and impunity.

Mauricio Villeda (Liberal Party) suggests a comprehensive security model, with a focus on public security, and working to stem the causes of violence and insecurity. He also stresses the importance of institutions working together.

Salvador Nasralla (Anti-Corruption Party) advocates for a preventative approach to combating crime by promoting transparency and fighting against impunity. He acknowledges the importance of cleaning up the justice system and protecting whistleblowers. He also supports the creation of a community police force.

Carlos Enrique Reina (Liberty and Reunification Party) wants to clean up the police and create a community, rather than military, police force. He also proposes reforming the system for appointing judges, prosecutors and the Court of Auditors.

Jorge Aguilar (Innovation and Unity Party) aims to reclaim the public sphere, form alliances to combat crime and tackle both its causes and effects to ensure public security. He supports a community police force.

Ricardo Álvarez (National Party) is in favour of the military police and for the prevention of violence through the strengthening of local governments. He also believes in the need to clean up the justice system.

Knowing the candidates´ plans will provide citizens with the information they need to make an informed decision about who to vote for. It will also help ensure that the elected candidate delivers on his promises and implements his campaign proposals.

Corruption is one of the main obstacles to democratisation, respect of human rights, poverty reduction, ending inequality and improving security. It is for this reason that any government plan truly aimed at reducing the level of insecurity should go hand in hand with a comprehensive strategy to reduce corruption.