ALAC Zimbabwe’s mini survey offered an opportunity to raise awareness about citizens demanding accountability from public officials. The posters carried the messages that “corruption is a crime and must be treated as such”; and “political leaders enjoy the gains of impunity with lavish lifestyles, while all of us suffer in poverty”.

Many Zimbabweans feel that the lack of political will to enforce asset disclosure laws is aiding impunity by top level public officials in the fight against corruption, says a recent mini survey conducted by Transparency International Zimbabwe.

This mini survey was prompted by the ongoing discussion and growing demand for public officials to declare their assets in Zimbabwe. During the official opening of the first session of the Eighth Parliament, the president talked tough about graft and indicated that apart from strengthening the Zimbabwe Anti-Corruption Commission (ZACC), the constitutional anti-corruption watchdog, ZACC commissioners would be made to declare their assets.

Transparency International Zimbabwe welcomed the unprecedented move and called for a broadening of the scope for the lifestyle and asset audit to cater for all top level public officials. The Advocacy and Legal Advice Centre (ALAC) Zimbabwe set out to conduct a mini survey to find out if many Zimbabweans understood what asset declaration is and whether they agreed that declaration of assets can be used as a tool to curb corruption in government.

ALAC Zimbabwe did a flash mob in the city centre and conducted the mini survey. The questionnaire consisted of a mixture of closed and open ended questions asked to 100 respondents.  Some 98% of the respondents agreed that all senior public officials must declare their assets and this declaration must not be confined to ZACC commissioners only.

While Zimbabwe seems to have dotted the i‘s and crossed the t’s in terms of ratifying international and regional conventions against corruption and having laws in place against it, there lacks a genuine effort by enforcement agencies to put these laws to the test.

Whereas Zimbabwe ratified the United Nations Convention Against Corruption in 2007 (UNCAC), which in article eight requires state parties to establish measures and systems for declaration of assets by public officials, there has been no such system set up since.

Locally, apart from there being laws criminalising various acts of corruption, for instance, the Criminal Law Codification and Reform Act [chapter 9:23], there has been a conspicuous failure to enforce the laws by responsible officials. High ranking public officials continue to enjoy impunity even as a litany of allegations have been made against them.

Zimbabwe has been mired in multiple corruption scandals since independence in 1980. In a report released by the Anti-Corruption Trust of Southern Africa (ACT-Southern Africa) titled Corruption Cases: Lest We Forget: Bad Leadership Examples for Accountability, Transparency and Integrity in Zimbabwe, senior government officials were named as having been implicated in major corruption cases in the country.

Most of the cases were never finalised and appear to have been forgotten. During the opening of parliament, the president himself further made shocking revelations about corruption in the Zimbabwe Mining Development Commission where an investor was fleeced of US$6 million, yet no arrests have been made to date regarding the offence. This impunity being enjoyed by senior government officials could be minimised if they had to declare their assets.

The mini survey also revealed that apart from a lack of enforcement of laws and systems against corruption, there is a dearth of information in some sectors of society about how to effectively demand public accountability.

While the general view held by the public is that all state officials must disclose their assets, there seemed to be limited knowledge by the respondents as to the link between asset disclosure and greater public accountability.

The attitude seemed to be “let the public officials declare assets so when they are caught stealing public funds they can be punished”. This is mostly reactive, but would be enhanced by the public proactively demanding for accountable use of public funds.

During the roll-out of ALAC Zimbabwe’s mini survey, participants used dance and drama to raise awareness about the right of the public to demand accountable use of public funds over and above lobbying for asset declaration by public officials.

To drive home the proactive aspect, one respondent recommended that Transparency International Zimbabwe continues “to teach people how corruption can kill our Zimbabwe”. 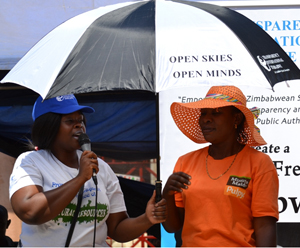 Women participants in the survey said it’s a must for public officials involved in service delivery to declare their assets.

Most women respondents in the survey said they thought it’s especially important for public officials handling service delivery to declare their assets. The mini survey was conducted during a period when most suburbs in Harare were facing a water crisis and heavy electricity load-shedding.

The women indicated that if asset declaration has to be limited; it must apply to public officials located in institutions providing day-to-day services like the Ministry of Energy, Zimbabwe Electricity Supply Authority and Zimbabwe Water Authority.

Transparency International Zimbabwe will continue to promote genuine efforts by public officials to declare their assets while nurturing the public’s desire for greater public accountability. As one respondent put it, we must “take a holistic approach by involving everyone in the fight against corruption, from cell level to the highest”.

If the public proactively demand accountability for use of public resources and enforcement agencies ensure that public officials declare their assets truthfully, this can be one step towards reducing corruption in Zimbabwe.