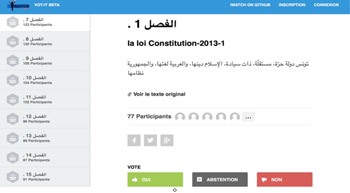 A screenshot from the website which enables Tunisians to vote on articles in their new constitution.

As the first Arab country to have a constitution drafted back in 1861, Tunisia is again at the forefront of change as it takes its final steps in its democratic transition. The country that led the Arab Spring revolutions in the region is now – more than 150 years later – almost ready to adopt its new constitution, which will preside over the different institutions and bodies of the republic.

Transparency International’s Tunisian partner I Watch has been playing a vital role throughout this transition process to promote good governance and transparency. As soon as the vote on the constitution kicked off on 3 January, we began monitoring the process directly from the Constituent Assembly. The monitoring will continue until the last day of the voting by the deputies (members of the assembly) on 25 January, according to government timelines.

Alongside this monitoring and observation, I Watch has set up a website to enable citizens to vote on the new constitution – article by article – and give their opinions, just like any member of the Constituent Assembly. Citizens can now have a say in their country’s future.

The website is not only handy in terms of counting votes and engaging citizens, it also enables the organisation to outline which articles are most important to Tunisians, such as those covering rights and liberties.

With youth engagement being one of I Watch’s focus areas, we’ve also initiated a project called “Model Constituent Assembly” (MCA), which mimics the real Constituent Assembly. The first part of the project in September 2012 gathered together 217 young women and men from all over the country to represent various political parties (the aim was for participants not to belong to the parties they represented).

I Watch has been running for almost three years, having been set up as a watchdog organisation by a group of young activists shortly after the revolution. It focuses on engaging youth in fighting corruption, enhancing transparency and promoting good governance of Tunisia’s governmental institutions.

The simulation lasted for three days and culminated with a press conference during which I Watch presented the vice president of the Constituent Assembly with a set of recommendations, which the young deputies worked on during the three-day exercise.

On 15 January the project took a different approach, aiming at holding the government and its deputies accountable. This part of the project also lasted for three days, but took the format of youth asking questions to government officials and deputies, and getting them to answer. One of the issues tackled during these sessions was impunity.