Corruption and security: uncovering the elephant in the room at the Munich Security Conference

A 360° view of the conference hall at the 50th Munich Security Conference.

Last weekend the City of Munich saw one of its most admired and, for some, most controversial events of the year – the Munich Security Conference.

In the beautiful halls of the conference venue (Bayerischer Hof), heavily guarded by police and security personnel, an astonishing density of the world’s leaders and security and policy experts annually exchange ideas about pressing issues in this field. In the same minute, you could see the German Foreign Minister Frank-Walter Steinmeier, EU Commissioner Štefan Füle, or UN Secretary General Ban Ki-moon walk by.

For most of the military and the majority of defence experts, fighting corruption is not seen as one of  their duties. This view is myopic, given the developments in Afghanistan and other post-conflict scenarios, where intervening forces clearly face issues related to corruption – if they don’t contribute to entrenching corruption further.

When Transparency International Germany started working on a study titled Corruption as a Threat to Stability and Peace, in cooperation with the Transparency International Defence and Security Programme, the faces of some “stakeholders” were more likely to reflect a look of puzzlement than an understanding smile. We launched this report at the Munich Security Conference to kick off a year-long project to strengthen the international response to corruption as a threat to security and peace.

The topic is slowly making its way into the minds (if not yet the hearts) of the security and defence community. That Transparency International Germany managed to get invited to the Munich Security Conference – not only to launch its study there, but also to host a cooperative event – is testament to that. 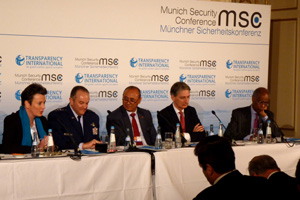 Transparency International Germany presenting its study during the break-out session.

During the presentation of the study, Edda Müller, chair of the board of Transparency International Germany, underscored that international actors have neglected the importance of fighting corruption for far too long, and that they have to further integrate approaches to good governance, rule of law and anti-corruption in their peace operations.

Mark Pyman, Director of the Transparency International Defence and Security Programme, added that the case of Afghanistan shows that corruption threatens mission success and sustainable security. Organisations must give proper attention to the issue in future interventions and develop robust policy, training and doctrine.

It became clear in the discussions that international actors face a dilemma of balancing short-term and long-term goals; of prioritising challenges in a conflict that often, at times, is not fully understood; and of working together for an agreed-upon strategy.

Wieland-Karimi said, for instance, that containing corruption takes about 20 years – a time frame that is usually not attributed to military intervention. General Breedlove argued that the military focuses on the symptoms of a conflict, and on providing a safe and secure environment for other actors. He admitted, however, that better coordination, planning and training is needed with other actors: “[T]he actual practice of real cooperation on the ground between all agencies – civilian and military – we shamefully find is still very much a work in progress.”

Despite the reluctance that remains, the presence of Transparency International at the Munich Security Conference is in itself a success. And the launch of this report is just the starting point for further initiatives.

The year-long project, “The Corruption Threat to the Security and Stability of Fragile States – Towards a Better International Response”, is supported by the Robert Bosch Stiftung, and seeks to spark a discussion among relevant stakeholders, and to raise awareness within the broader public.

Corruption is a threat to stability and peace, that much is clear. We hope that our work in the next year can prompt the world’s militaries to recognise this and take steps to address the problem.