Slovenia: ‘Women’s voices must be louder’ 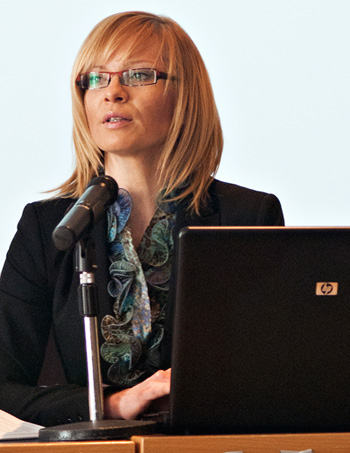 In the second blog of this series, Simona Habič, Executive Director of Transparency International Slovenia, tells us about putting the anti-corruption agenda on the map in her country and how a new breed of young women leaders are changing the game in politics.

You helped set up Transparency International Slovenia five and a half years ago – what have been some of the highlights during your time at the helm?

Over the years we’ve made a wealth of informative and practical anti-corruption material available online, which had never been done before in my country. We’ve been able to put the anti-corruption agenda on the map and thanks to well-received publications like the National Integrity System Assessment, our recent Whistleblower report and our annual reports, our work is being taken seriously.

… What needs to happen next?

We’d like to strengthen the work of our Anti-Corruption and Legal Advice Centre and focus on political-party financing and lobbying through our research and projects. At the moment the Slovenian public is largely unaware that while lobbying is acceptable, it must be regulated and transparent.

Another big change I would like to see is the appointment of a new head and deputies for Slovenia’s anti-corruption commission (the entire senate resigned in November 2013). Transparency International Slovenia is playing an active role in supporting the appointment of a new president and two deputies – the vote is taking place right now.  Over the next two years we also plan to work more with the youth and Slovenia’s private sector.

Do you think women are underrepresented in anti-corruption efforts in Slovenia? If so, why is this?

There are not enough women working in the anti-corruption sphere in Slovenia; it’s largely dominated by men. Women’s knowledge in this area is also underrated and people don’t often recognise how resourceful women can be.

Although we do have a women’s quota in parliament, where 25 per cent of candidates on party lists must be female, this doesn’t extend throughout the public system when it comes to high-ranking positions.

It’s just my opinion, but it also seems that when it comes to anti-corruption efforts in general, there’s a divide: it’s mainly men working on the sanctioning side, and mainly women involved in preventative measures – like working with the business sector and the civil service.

What needs to change to strengthen women’s roles in the anti-corruption movement in your country?

Women need to be louder in the anti-corruption sphere, and more valued for the contribution they make. There also needs to be a better mix: women in the anti-corruption commission should be working on the preventative side and the sanctioning side. We should make our voices heard more! Women should also be paid the same salaries as men and be nominated for high-ranking positions. But we do have a female prime minister, for a start, and there’s parliament’s quota. Females are also active in anti-corruption NGOs.

In Slovenia, it’s Information Commissioner Nataša Pirc Musar. A trained lawyer, she worked in journalism before being appointed as commissioner. She is moving things forward and has a really strong personality. She knows how to communicate and how to handle the media. And she’s not afraid to call ministers to task.

Internationally, my hero is Helen Darbishire, the founder and executive director of Access Info Europe. I follow her work closely.

In Slovenia, my heroes are all the females who survive the political arena, which can be a challenging environment. Even if I don’t agree with their political views, women in the Slovenian parliament do a lot for the empowerment of females in other professions – on a symbolic level. And young women are now entering politics – they’re setting the example. These women inspire my work because they are fighters and they get the job done.