From the ground up: Palestinian women on the frontlines of anti-corruption

In the fourth blog of our series we talk to Viola Attallah from our chapter in Palestine AMAN Coalition, Project Coordinator for the local integrity systems research, on how social change starts from the ground up and how Palestinian women have been instrumental in that process. 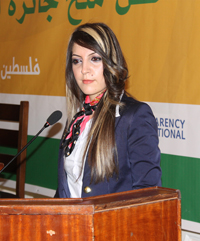 Viola Atallah is inspired by all Palestinian women, who have been patient through the years of occupation.

What made you join the anti-corruption movement?

I was studying for a Bachelors of Public Administration at Birzeit University and I came across the Integrity Pacts that AMAN had developed. For the first time I started understanding how corruption pervades our daily life. I became intrigued with what integrity means in a more practical sense so I started volunteering with AMAN in 2009. You know in the Palestinian context we are facing numerous political obstacles and corruption eats away at our well-being.

I was a graduate fresh out of university and that’s when I understood the effects of wasta (favouritism) because I couldn’t get a job for the longest time. They would be advertised one day and the next they would go to someone who knows a high-ranking official or has family connections. I am not the only one affected by this, but a huge cross-section of Palestinian youth.

What areas do you focus on in your work?

I work a lot with municipalities and local councils on improving their efficacy in delivering services to citizens. This involves ensuring systems of transparency where citizens feel like active participants in their suburbs and neighbourhoods through, for example, an effective complaints centre and enforcing codes of conduct.

Last year, the Anti-corruption Commission received around 390 cases of complaints that involved the breakdown of relations between the municipality and citizens not receiving a service. Our Anti-corruption Advocacy and Legal Advice Centres also looked at similar cases.

“A woman will tell you
every home she has ever inhabited
has been broken into
starting with her body”
― Palestinian poet and author Suheir Hammad, Zaatardiva

I found during our awareness-raising workshops, involving citizens to inform them of their rights, that women felt unsafe in their workplaces, especially in local government departments. The burden of a patriarchal system bears down on them not just bureaucratically but also sexually where they endure the humiliating pain of sexual harassment. They can’t do their jobs! It is everywhere and there’s always a crippling fear surrounding this phenomenon. These women don’t know their rights in the workplace and are afraid of repercussions such as losing their jobs if they speak up.

That must have been shocking to you?

Yes, we even did a report about it in AMAN, collating data about how common this social phenomenon was and how it is connected to corruption where a woman cannot do her job, she is not allowed the same chances to excel as her male counterparts and is not afforded the respect she deserves. I was proud that these women’s voices were heard in this report.

What else are you proud of in your work?

Well, when I first started working, councils wouldn’t listen to us. There were closed doors or even taboos to start talking about corruption in a concrete manner and we have broken that barrier. Councils now recognise that they represent citizens, they have important duties to fulfil and they are accountable to their constituency. Now there is, for example, a more transparent recruitment system in the Ram municipality. Political will is at an all-time high where that specific municipality, the biggest in the West Bank, is actively seeking us as a partner.

Speaking of political will, what can Palestinians do to fight corruption more effectively?

Palestinian women have been fighting against occupation, poverty, the indignity in their lives and striving for leadership. Legislation must be put in place to enable women to aspire to important positions of power, to break the silences (around sexual harassment) and to know their rights.

Lastly, who is one woman who inspires you the most?

All Palestinian women are my inspiration. They are patient and have the emotional fortitude to endure pain. So many Palestinian households have lost a family member or seen them imprisoned. We have endured years of occupation, I think of my mother and my grandmother and what they have gone through and it is heart-breaking.