Shortly after publishing this blog, we were informed that the elections for the Superior Electoral Court took place unexpectedly on 11 March. David Gaitán, writer of this blog, gives this update: “Congress once again left transparency and accountability outside. It was done in the usual style, through contributions and negotiations in private and dark rooms. The decision making process was not transparent. We now again remain with the idea that the legislature only responds to political negotiations.” 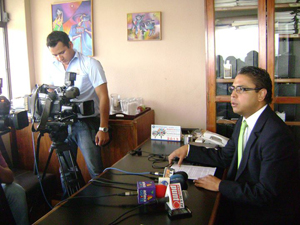 The Guatemala election system faces a crisis: there is illegal campaign financing, early elections and unfulfilled legal sanctions. This is the reality facing the new Superior Electoral Court, which will probably be elected on 13 March. The Tribunal will be responsible for organising the next general elections in 2015.

In Guatemala magistrates of the Superior Electoral Court are elected by Congress out of a list of 40 candidates. These 40 people are proposed by a commission of legal experts without particular political interests.

Nevertheless, practice has shown that the commission is indeed influenced by sectors with particular interests that want to co-opt the Superior Electoral Court. They want it to be a weak institution with little regulatory and sanctioning power. The last election to the Electoral Court was based on political negotiations. There were no clear and transparent selection criteria, ensuring that magistrates had been appointed based on capacity, suitability, and honesty.

To stop this from happening again, Guatemalan civil society organisations have advocated for a more transparent process. They have achieved some progress: the meetings of the commission are public, and so are their votes; the curriculum vitae of the candidates have been published as well as the minutes of the meetings and other information that the commission holds.

Acción Ciudadana, Transparency International national’s chapter, has made a call for Congress to:

As of today, these recommendations have not been taken into consideration and the risks of having a non-transparent and discretionary election increases every day. If this happens, magistrates will be chosen by the parliamentary groups that have a majority in Congress without any information on their motivation for the voting. This puts the democratic strengthening of the country at risk.