With more than 1 million Syrian refugees settling into Lebanon, the need to protect this vulnerable population from the inevitable onslaught of corruption that often follows displacement is crucial more than ever before.

With this unfolding tragedy in mind, The Lebanese Transparency Association has opened new Advocacy and Legal Advice Centres (ALAC) in the Bekaa region and in the south of Lebanon to reach a broader base of Lebanon’s population and turn the tide against growing public apathy about corruption.

For example, municipal misspending is an important public issue leading to inadequate infrastructure and access to public services in regions such as Bekaa and Nabatieh. The new centers are important for these underrepresented communities, who often face difficulties reaching the Advocacy and Legal Advice Centre in Beirut (which opened in 2009). 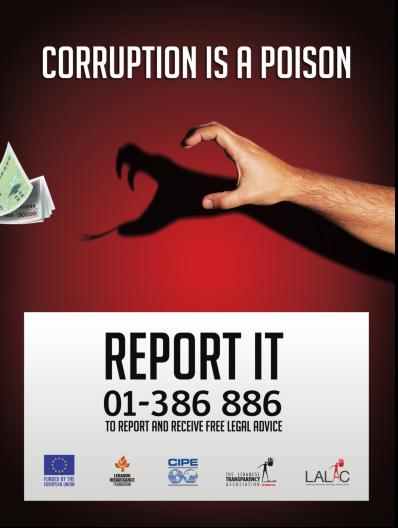 Area residents are already reporting to the LALAC hotline; we have received nearly 200 calls since December, and are actively working on more than 50 cases of corruption currently.

Citizens have reported being asked to pay bribes in order to receive any number of official documents, including construction permits, employment papers and death certificates among others. Others have reported about municipal representatives misusing their position of power for personal benefit and a governor refusing to renew a woman’s employment contract unless she accepts his sexual advances.

Although 71 per cent of Lebanese surveyed think corruption in the public sector is a serious problem in Lebanon, only about half of them believe that ordinary people can make a difference in the fight against corruption. Widespread apathy and defeatism about the state of corruption in the country, as well as fear of repercussions, prevent many of those who do believe they might be effective in fighting corruption from ever taking action. Through the ALACs in Lebanon, we are working to transform this attitude and encourage Lebanon’s residents to no longer accept corruption as the status quo.

The first in a series of comic strips based on complaints received from the public. This one shows an interaction between a citizen and local council employee asking for a bribe in exchange for a building permit.

This starts with letting the public know there is an organization that they can talk to and, crucially, that wants to help them do something about corruption. In the case of Hoda Sankari, a 33-year old lab technician from Tripoli who reported a high ranking government official propositioned her in order to renew her work contract with a municipal laboratory in northern Lebanon, LALAC acted as an advocate.

The legal team at LALAC provided Ms. Sankari with free legal advice, encouraging her to file a written complaint with the Ministry of Interior, naming the governor and detailing her experience and evidence. The LALAC team is currently following up with her closely on the case, and will be in direct contact with the Ministry of Interior to ensure that her case is properly addressed.

The time for action against corruption is now – if you are living in Lebanon and have been victim or witness to a case of corruption, report it now at +961 386 886.

Members of parliament, community leaders and business association representatives have joined in calling for Lebanon’s residents to step up and report cases of corruption, voicing support for the LALAC program at kick-off events for the new centers.

In the coming months, the LALAC team will launch an advocacy campaign focused on the draft whistleblower protection law to complement their efforts to engage citizens in the fight against corruption. In parallel, the Lebanese Transparency Association is also pushing for passage of the access to information draft law in Lebanon, which will help citizens better monitor and collect evidence on cases of corruption.

Accountability starts with the mobilization of citizens understanding their rights, recognizing how corrupt practices are rooted in their everyday life and standing up to those who continue to abuse their power.