Campaign for transparency in Maldives pays off

Access to information (ATI) is not simply a piece of legislation. A country’s passing of such an act signals a change in culture from one of secrecy to one of transparency, and a strengthening of democracy.

ATI is the freedom of citizens to access information held by public bodies, and is quickly becoming a global standard, with the Maldives becoming the 99th country to pass such an act. The historic ratification of the country’s first ATI legislation took place on 12 January 2014 – five years after Transparency Maldives’ campaign for an effective ATI Act began. 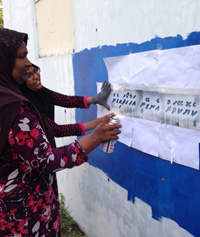 Members of the public participating in Transparency International Maldives workshops.

But how and why is an effective ATI law so important for the Maldives? Free flow of information and democracy go hand in hand. Democracy demands people’s ability to effectively participate in decision-making and this can only occur if a government is transparent. Citizens’ and the media’s right to information places the government under the supervision of the people it serves. A government that is regularly monitored is one that will work in the public interest and put power in the people’s hands.

This is especially important for the Maldives, which is still recovering from a 30-year rule by former President Abdul Gayoom, who was accused of corruption, human rights abuses and creating an opaque society. This was followed by the country’s first democratically elected president resigning three years into his five-year tenure amid protests and allegations of a lack of transparency.

The passing of the ATI bill is a great example of collaborative efforts between legislators, civil society, state institutions and international experts. Transparency International Maldives organised workshops, grassroots advocacy and media campaigns, travelled to five atoll and 12 island communities, engaged with the government, and brought together many other stakeholders to push for a strong ATI law.

The workshops run with community-based organisations, for example, were conducted with the aim of increasing grassroots demand for the right to information. It worked. Some participants realised that the extent of their community problems were in one way or another linked to a lack of access to information. This motivated participants to send hundreds of text messages to their MPs requesting that they quickly endorse a robust ATI bill. This renewed focus on the bill that was stagnating in Parliament.

In arguably our biggest advocacy success within Parliament, the ATI bill was endorsed by 67 of 68 MPs in attendance, without any significant or substantial change to the structure and spirit of the bill.

As a testament to the strength of the bill, which Transparency International Maldives was heavily involved in drafting, the Canada-based Centre for Law and Democracy rated the ATI bill as the fourth strongest in the world.

However, we still have a long road ahead. The simple passing of an ATI law does not mean that the principle of freedom of information will be established. The positive impact it will have on ordinary Maldivians depends on numerous factors: these include funding, whether there are enough people to process all the requests, and whether the government genuinely wants to create a more open society – or simply use the law as window-dressing to project a certain image to the outside world. That is why we will continue to campaign for the effective implementation of the ATI law.