Piketty: Diagnosing inequality and prescribing a dose of anti-corruption

It’s the blockbuster policy book of the year: Thomas Piketty’s weighty Capital in the 21st Century, a 600 plus-page analysis of the scale and perils of rising inequality. As Piketty argues, wealth and return on capital are growing faster than the overall economy and income from labour. Making matters worse, labour income is becoming increasingly skewed, with an ever increasing share going to a small band of top earners.

The result: we are approaching levels of inequality in wealth and income that are increasingly difficult to justify even from a meritocratic or libertarian point of view. This could corrode the basic notions of trust, fairness, solidarity and social cohesion that underpin our economies and societies.

The elephant in the room?

Technology, education, socio-demographic factors are all found by Piketty to play their part in these dynamics of growing inequalities in assets and income.  But what about the role of corruption?

We know from a lot of comparative empirical analysis (for example here and here) that high or rising levels of corruption are closely correlated with high or rising inequality.

As some commentators, most prominently Moses Naim in the Atlantic, lament, corruption seems to be the elephant in the room that Piketty fails to notice. And indeed he does not mention the “c” word once throughout the book. 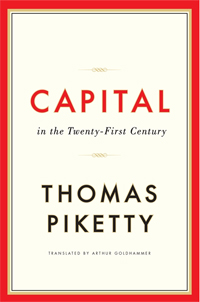 Still, Piketty discusses drivers of wealth and income inequality that are closely tied to unaccountable decision-making: weak governance and the likelihood of policy capture. In Transparency International terms this is a situation where the abuse of entrusted power for private gain – our definition of corruption – is high.

Piketty suggests that rising income and wealth inequalities might have something to do with the failure of corporate governance and the resulting undue discretion of managers to determine their own pay. Even more importantly, he identifies the decline of progressive taxation of wealth and income – personal and corporate – as additional drivers of growing inequalities.

Piketty attributes these developments at least partly to asymmetric influences on policy-making precipitated by the meltdown of organised labour and the growing ability of international business and high net-worth individuals to play different jurisdictions off against each other and engage in international tax arbitrage that keeps redistributive policy-making in check.

In other words, Piketty delivers a diagnosis of a very consequential case of policy capture without naming the thing. So in fairness, he does bump up against and starts to grapple with the corruption elephant in the room. He might not go all the way to develop these arguments deeply and exhaustively – yet this seems excusable, given that his major focus of analysis is elsewhere – but he indicates its pernicious consequences.

A joint agenda for progress

Interestingly, some of the remedies that Piketty and his close collaborators such as Gabriel Zucman propose overlap heavily with Transparency International’s policy asks to curb money laundering, illicit enrichment and promote financial integrity.

Piketty et al support our call for much more transparency in corporate financial reporting, disaggregated on a country-by-country level, and an end to secrecy jurisdictions that abet illicit enrichment and money laundering. Better corporate governance, with managers more closely and critically supervised by boards to rein in unaccountable remuneration policies, is also high on the agenda.

Piketty views these transparency and accountability reforms as prerequisites to reinvigorate an informed democratic debate about putting in place the policies to check corrosive inequalities. One may not necessarily agree with his ultimate ambition to see a global tax on capital instituted. But it seems self-evident that societies should have a chance to have an informed debate about these issues, something that is not possible without more corporate and financial transparency.

This line of reasoning is very much aligned with growing demands from organisations such as ours to enhance corporate reporting and financial transparency – from disclosure of beneficial ownership to country-by-country reporting of global business as preconditions for tackling grand corruption and money laundering and as an essential, yet currently overlooked pillar of good corporate citizenship.