Philippines: Stories from the fight against corruption

What does it take to be a corruption fighter? What does corruption look like on the ground?

We spoke with three inspiring women from our chapter in the Philippines – Executive Director Cleo Calimbahin, Administrative Assistant Diana Cristino, and Finance and Operations Officer Marie Quizon – and asked them what it’s like to face and fight corruption day every day.

What inspired you to join the fight against corruption?

Diana: Poverty. I walk around a lot in Manila, and I see poverty everywhere. I believe that corruption is one of the major reasons why the Philippines is a really poor country.

Cleo: I think that people don’t have to live the way they do. They can and should expect more from the government in terms of social services, they should demand peace and order, a sense of safety just walking down the streets. All that could be delivered to the people if there was less corruption.

When did you first realise corruption was a problem?

Cleo: I think in the Philippines you start realising corruption is a problem at a very young age. In some countries, where corruption is not a problem, you know as a child that if you see a policeman you can run towards him and ask for help. But even as a child in the Philippines, if you see a policeman, you stay away from him. You don’t go near him.

What kinds of corruption do citizens in the Philippines face in their daily lives? 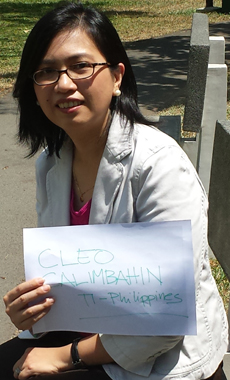 Cleo: For me, an iconic image is jeepney (local bus) drivers at a particular stop being made to hand over cash to a traffic enforcer. We call these people kotong cops, which roughly translates to someone who forces people to hand over their cash. It’s a common form of intimidation – drivers surrender their money because they feel under threat.

Another image I remember is an old man, clearly very poor, being forced to pay the elevator attendant in a public hospital just to go up two floors.

Marie: Funds being diverted that should be used for improving the roads and the health services, or increasing the salaries of teachers and the police. One example would be the pork barrel scandal, which is affecting all of us.

What kind of qualities do you need to fight corruption?

Diana: You need to be courageous, because you’re going to be fighting a lot of people with a lot of money.

Cleo: You definitely need courage to face corruption here – you are dealing with the livelihood of some of these very, very powerful people. But you need fairness too – you need to be able to understand that some people might have ended up on a certain path because of particular situations and conditions.

Marie: Perseverance is also a very important quality. You really have to persevere to eventually make a difference. 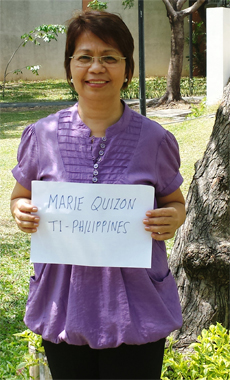 What do you think needs to change to stop corruption?

Cleo: I think both the political and the economic elite should come together and agree that it’s time to stop taking so much from the country, and start giving back. There should be elite consensus for long term development and for a corruption-free Philippines.

If you had a message for someone fighting corruption, what would it be?

Marie: My message is don’t be afraid to fight. It’s really just a matter of approaching the right people or the right organisation. The fight starts at the lowest level, in our daily lives, but from there we could really make improvements to our government and in the way it’s being run.

Diana: Go for it! As simple as that.