Five reasons corruption is getting worse in China

The big story in the Corruption Perceptions Index 2014 is that corruption seems to be getting worse in China, despite a two-year anti-corruption campaign.

The government has run a high-profile anti-corruption campaign ostensibly targeting both “tigers and flies” for two years. Officials are eschewing ostentatious consumption of luxury goods such is the fear of prosecution.

So how can corruption be getting worse? The Corruption Perceptions Index is based on country experts and businesspeople, looking more at structural issues than what’s in the news.

Here are five factors that could lie behind the numbers:

1. Too much stick, not enough transparency …

Bringing the corrupt to justice is important, but a more transparent judicial system would do more to convince people that the campaign is part of a lasting change.

The delivery of criminal justice is relatively effective, but compromised by political interference.”

A crackdown alone will not paper over a public sector lacking transparency and accountability in public bodies. What will help are transparency reforms such as publishing all spending online and passing laws that protect citizens, reporters and bloggers who expose corruption.

The lack of competitive political processes, institutional checks and balances and accountability mechanisms, an independent judiciary and a free press increase the regime’s susceptibility to corruption” 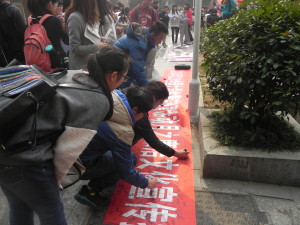 One reason a Chinese official can still get away with corruption despite a strong crackdown is the ease with which even petty officials can hide corrupt gains offshore.

In January, leaked files revealed 22,000 “tax haven clients” from Hong Kong and China. They revealed that:

The Chinese government has itself recognised the global dimension of its corruption problem. Chinese state media has recently been reporting that US, Canada and Australia are the most popular destinations for corruption suspects.

China is not the only country trying to stop money flowing out of its own country – tracking and recovering stolen assets is a problem developing countries have been struggling with for decades.

But China’s rapid growth means the problem is on a much bigger scale. It is the world’s biggest exporter of illicit flows, black money like bribes and criminal activity – we are talking about
US$1 trillion over a decade (2002-2011).

China recently made a declaration requiring officials to register their property. This is one small step in the way forward. But indeed positive.

China’s inconsistent message at G20 level on publishing beneficial ownership information in public company registers is particularly alarming, given China has a weak culture of transparency.

China has at least made a declaration requiring officials register their property. This is one small step in the way forward. But indeed positive.

4. Failure to regulate the business sector

China’s biggest companies are less transparent than global competitors, according to a report issued by Transparency International last month. Of the 124 companies in the report, seven of the bottom 11 were from China.

The fact that Bank of China is at the bottom of the list speaks volumes. This is because there is insufficient regulation of business practices. Today, a company doesn’t break the law in China if it pays a bribe under 200,000 yuan (US$32,700).

5. The lack of bottom-up reform

China should allow more freedom for civil society and media to hold officials to account.

Protection of fundamental rights is weak, ranking 96th globally, notably due to substantial limitations on freedom of speech and freedom of assembly.”