Fighting corruption above the Arctic Circle

Greenland is a semi-autonomous country within the Kingdom of Denmark that is half the size of Europe with a population of just 57,000. With the prospect of a fast-developing oil and mining industry, this small community needs to recognise the corruption challenges it will be facing in 2015. 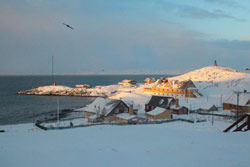 Transparency International Greenland’s chair, Anita Hoffer sat down with Peter Varga, regional coordinator for Central and Northern Europe, to answers questions about fighting corruption around the Arctic Circle and a new awareness in Greenland of the risks following a corruption scandal that forced snap elections at the end of 2014.

What are the main corruption-related challenges in Greenland?

Nepotism, favours and important decisions made in very small circles with a lack of transparency. Traditionally government is not very participatory and transparent. And that is not solely the fault of politicians and civil servants. The public is responsible as well by not caring. But that is changing – and changing fast, which means that actions that only a few years ago weren’t seen as corruption-related are today recognized as a challenge. But recognizing a challenge is one thing – changing the existing culture of favours and nepotism still takes a lot of work.

What impact has your work had so far?

First of all it has given a solid platform and a common frame of reference relating to the anti-corruption agenda. Hopefully, TI Greenland has also given some individuals a reason to keep fighting and not accept nepotism, for example. And then there are the measurable results: we are soon to have legislation on whisteblower protection and politicians being open about their interests and affiliations. This is something that Parliament may make mandatory. (This was postponed due to elections, but will come up again.) 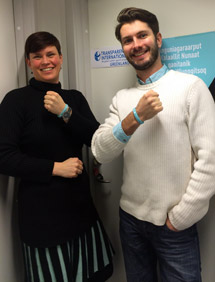 Greenland has a small population, which must present unique challenges in terms of your own work. How do you manage to counter them?

It is a challenge for us as well as for everybody else in Greenland. Recently, we had a discussion about one of our own members and all members of the TI Greenland board had some kind of relation to the person, which made it very difficult. But we handle it the same way that we advise everyone else to handle such matters: By being very open about the process, and by members of the board excluding themselves from decisions if there’s any risk of conflict of interest. Because the population is so small, there are no perfect situations. I mean, every once in a while you might have to hire a friend or a cousin – on merit because of qualifications – and that is not necessarily wrong as long as the process is very open.

What do you expect from the new government and how can TI-Greenland assist the fight against corruption in the coming months?

The new coalition government is led by the same party as the former premier who was involved in the scandal that led to new elections. First, it needs to distance itself from the scandal. It has already made several positive promises regarding whistleblower legislation and legislation fighting corruption. These issues are specifically addressed in the coalition agreement, which states that the abuse of power and misuse of public funds must be prevented through new legislation. And the coalition agreement promises more openness in filling vacancies at the highest positions in the administration and in government controlled businesses. TI Greenland will allocate resources to the hearing-process to help the legislation along. We’ll also help the Government remember the promises it has made. We all know that not every part of a coalition agreement can be carried out. But through dialogue, TI-Greenland can make sure, that the new government doesn’t lose focus on the promised initiatives to fight corruption.

How will the prospect of a growing extractive industries sector influence the future of Greenland?

It is well-known that there are corruption risks involved in the extractive industry. And Greenland is not a rich country, which increases the risk of corruption. On the other hand Greenland is very well regulated, and there’s a high level of recognition of the need for being prepared for what might be coming. The potential of the oil and mining industry has also had some positives so far. For instance, several Greenlandic companies now have anti-corruption policies in place, and we are positive the Government will as well. So the challenge is going to be enforcing these policies, and teaching extractive companies and others, that there are no shortcuts. If you want to work in Greenland, you do it by the book. It’s probably not going to be easy because of course there are people that are going to be tempted. But it is possible.