What made corruption a hot topic in sports 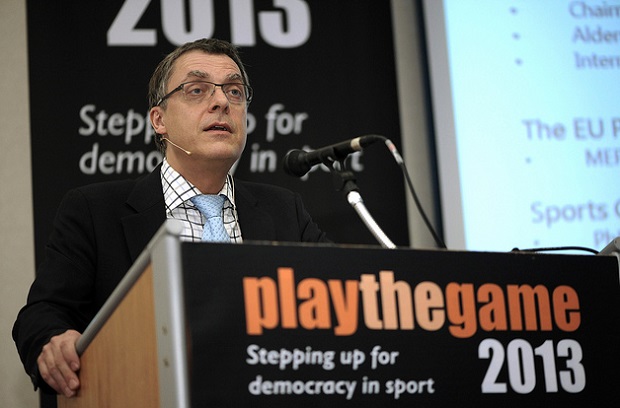 Jens Sejer Andersen is on the Global Corruption Report Expert Advisory Panel. He is the international director of Play the Game, an international communications organisation that has held international conferences on sport, transparency and ethics since 1997, long before the topic became vogue. Play the Game has been at the vanguard explaining the links between poor governance and some of sport’s biggest challenges: corruption, match-fixing and illegal doping.

TI: What was it like discussing corruption in sport when you started Play the Game?

JSA: There was an omerta in sport, not only of the cycling peloton; there was a tacit understanding among sport, sports media, the athletes, the sponsors that you didn’t want to rock the boat, so no one was interested in raising the debates we pursued. In 2005, for example, our conference focused on match-fixing. This was never raised at an international conference before. We talked about the illegal doping trade, also never mentioned. We covered corruption in world volleyball and at FIFA; we talked about sexual or violent abuse of athletes.

Now, ten years later, you find these issues in the draft charter for physical education and sport made by UNESCO which UNESCO’s general conference is going to adopt in November. This is a big step forward.

TI: What was the turning point?

JSA: Things had been building little by little towards a landslide and in my view the landslide was unleashed on 17 October 2010. The Sunday Times of London started publishing videos and articles about how FIFA Executive Committee members were ready to sell their votes for money the 2018 and 2022 World Cups. Very often in the past a great piece of journalism like this would have a short-term impact and then things would go on as usual. But things turned out differently this time. A few weeks later on 10 December FIFA actually chose the most opaque countries among all the bidders, Russia and Qatar. By doing so FIFA alienated three very big bidding countries with huge international clout and a critical press: the US, Australia and the UK. This ensured that the landslide was moving. The story did not die, on the contrary, it renewed public awareness of older stories about FIFA’s corrupt past done by investigative journalists like Andrew Jennings, Jens Weinreich and Thomas Kistner

TI: Now governance in sport is a hot topic. Where do we go from here and who has the power to bring about change?

JSA: Now the agenda has changed, now it is no trick to say we have a problem. Now it is about solutions, alliances and partnerships. Generally speaking there is a great awareness that cooperation is necessary. But if anyone can do something decisive about it, it is the International Olympic Committee (IOC) because the IOC has the key to the Olympic Games where most sports get a percentage of their financing.

After the Salt Lake City scandal the IOC reformed itself in order to survive, and when the Belgian Jacques Rogge became IOC president in 2001 there were expectations that the reforms would be extended to cover international sports federations. However, the IOC has again and again waived off calls for action by saying that the federations are autonomous and outside the reach of the IOC.

However, the IOC showed on two occasions that they could act if they wished: in boxing 10 years ago, the IOC simply said to the Amateur International Boxing Association that we are going to put your money in an escrow bank account until you reform and they were threatening to exclude them from the Olympic Games. And that worked. And when wrestling was threatened with being taken off the Olympic programme, the sport made governance reforms and changed its president in a very few weeks in 2013. But unfortunately there are numerous examples where the IOC has not reacted sufficiently: volleyball, weightlifting, football, handball….

TI: What do you think of the new reform Agenda 2020 announced by the International Olympic Committee and adopted in 2014 on big events and governance?

We now have another kind of political temper at the IOC represented in the new president Thomas Bach. He has added much more dynamics to the IOC and sports politics. But the jury is still out about whether he is willing and able to carry through reforms.

Agenda 2020 sends a pretty strong message, especially with regard to the big events. The IOC will be benchmarked by it. The most important aspect, to my mind, is that Agenda 2020 has concrete messages that the public is actually able to hold the IOC accountable.

I am less impressed by the approach to improving governance in the international sports organisations. Agenda 2020 is simply asking the international federations to send in self-evaluation letters once a year. It is too soft when you compare it to the situation in some organisations. But Bach’s supporters will say this is just a start and that it is too risky to lead a harder line.

It is true that there is a latent threat that some federations could break with the IOC. But only FIFA and football is financially strong enough to live happily outside the Olympic family. So the continued reference to the autonomy of the federations may end up as another bad excuse.

(The history of autonomy of sport and its relevance today is the subject of an article in the forthcoming Global Corruption Report: Sport by leading expert Prof. Jean-Loup Chappelet.)

This lack of action is causing widespread concern outside sport. I see now that the Council of Europe, the European Union, UNESCO are all increasingly aware and concerned that sport seems unable to reform itself.

So if Bach has the genuine intention of tightening his grip on governance in the federations, he can find leverage in the governmental concerns and he can live up to his own catchphrase: change or be changed.

TI: Supporters are generally more interested in what happens on the field of play. Do you think that supporters can play a role in pressing for reforms?

This is difficult to see because fans are organised in different ways. You have some very democratic organisations such as Football Supporters Europe and Supporters Direct. But you have other fan groups that are close to fascist, violent and with a criminal element too. To the extent that fan groups have a democratic basis, they can influence the debate very much. Not directly, but via public bodies: governments, municipalities, transnational governmental organisations. This is a movement that may play an even more important role for improving the governance of sport, and the best among them should be co-opted as stakeholders in to the governing bodies of their sport

TI: What is the role of civil society?

JSA: I can’t speak for all of civil society because it is too diverse. But the various groups in civil society at least have room to react now that sport and corruption has reached the public agenda. As for Play the Game, we must play a more solution-oriented role, but we will continue to highlight the many individual case stories and show that corruption is not a victim-less crime. We can help whistleblowers get worldwide attention and recognition and we also have a role in trying to increase our own understanding of what mechanisms make sport dysfunctional and how we can remedy the situation. This can only happen through broad alliances and debates with like-minded people.

TI: What affect can the new draft revised UNESCO International Charter on Physical Education and Sport and other political conventions have?

There is a growing understanding among governments that sport is an important area where politicians should invest commitment and resources. You could sense that energy when sports ministers from around 125 met for the big UNESCO conference in in Berlin in 2013. This can go away but right now there is a momentum and a real chance that this charter will not be as forgotten as the charter from 1978 that nobody has heard of (not even me!). And you have the Council of Europe convention. That is not to say that the governments are acting convincingly yet, but there is a window open for action now like never before.

TI: Is there anything else you would like to highlight in the fight against corruption in sport?

I believe it is extremely important that we support the whistleblowers and the investigative journalists who work to expose the corruption in sport.

In many cases they do not know what they are getting into, and how their lives can be changed.  Too many end up in desperate situations after they expose wrong-doing. They are victims of costly lawsuits, they cannot work. They face harassment.

This is where organisations like Transparency International and Play the Game should really go together and convince people in the sports movement, including sponsors, to start a fund or give other support system for whistleblowers. Officially, all sports organisations are against corruption. In reality, they typically sack, marginalise, slander and pursue those few courageous people who dare confront the powerful system with its own flaws.

Sports organisations run a de facto monopoly business on the privileged basis of association freedom, and this endows them with huge political and economic powers. This power should be generous enough to embrace and protect individuals who help them live up to their declared ideals of transparency of fair play. As of today, too many are all but generous.