Why did Transparency International visit Jordan? 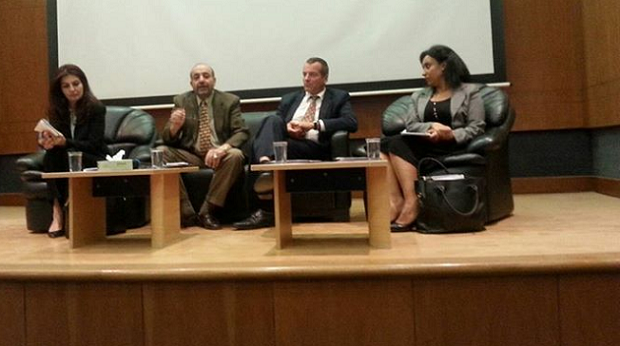 Cobus de Swardt, Managing Director of Transparency International (2nd from right) at the University of Jordan

We understand that The Middle East and North Africa finds itself in a very complex situation with major challenges to its stability, security and development. In that context we articulate four key messages to improve the governance indicators for Jordan. These messages are addressed to the government, the civil society organisations and the private sector. We are here to support.

In late October Cobus de Swardt, the managing director of Transparency International, spent four days in Jordan meeting with representatives of government, members of parliament, civil society, young people and the private sector. The goal was to identify practical and pragmatic ways for Jordan to improve its governance indicators.

When we speak about the Middle East we speak about complex issues that require deep insight into the context, such as terrorism, war, refugees and other crises.  But we can also speak about positive reform initiatives and the efforts to overcome the challenges.

One example is the refugee influx to Jordan because of the war in Syria. Jordan’s population of seven million people has jumped to 11 million in just a few years. Public services, including water, education, electricity and transportation suffer under this unprecedented pressure. For a country with such limited resources and in the heart of a volatile region, stability and security are stark priorities.

The meetings with the government officials were frank. We were told that Jordan will not be pushed in the reform process but is prepared to move together towards a comprehensive reform, adopting a principled but pragmatic approach.

In the fifth discussion paper of His Majesty King of Jordan, civil society is described as a key partner in the reform process. It should function as a national monitoring body and lead effective popular participation.

Transparency International has an active National Contact Group in Jordan, Rasheed Coalition for Transparency and Integrity that has engaged with major stakeholders over a short period of time to advance the anti-corruption agenda. Rasheed are currently working on the national integrity system study which captures the main issues that need to be addressed in the Jordanian anti-corruption pillars to enable the country make substantial progress on the international governance indicators, including the Transparency International Corruption Perception Index (CPI).

During meetings with the Chamber of Commerce, Jordanian businessmen emphasised the need for an effective public-private partnership regulatory system that recognises the business sector as a partner rather than a source of income to the government.

Clear recommendations along the same lines are already included in the Privatization Evaluation Report commissioned to assess the integrity of the process and its impact. On this front, Jordan is leading not only at the national level but also regionally. However, on-the-ground implementation of the report recommendations remains the main challenge. Will the government and state institutions take the lead in converting the recommendations into practice?

At the University of Jordan, de Swardt met with students and emphasised the importance of active participation and engagement in all public sector issues. He talked about the Open Government Partnership, which Jordan is a member of, and how that encourages citizen participation.

At the Government Leadership Forum, we presented a concrete road-map with four key steps that Jordan can take to improve its scores on international governance indicators, including on the Transparency International Corruption Perception Index. These are:

It takes time for reforms to reflect in international governance indicators but if the Jordanian institutions implement them in a gradual and sustainable manner, Jordan can set a model for progressive leadership in a highly volatile region.