10 June 2016 in Accountability, Africa and Middle East, Cost of Corruption, Politics and government

Putting Egypt’s top auditor on trial sends a clear message: the Egyptian government is waging a war. Not against corruption but against those who fight against it.

When President Abdel Fattah Al Sisi came to power in 2013, he made fighting corruption a top priority; “There should be full trust in the monitoring bodies and their procedures, and the culture of combating corruption should prevail,” he said on a national TV interview. 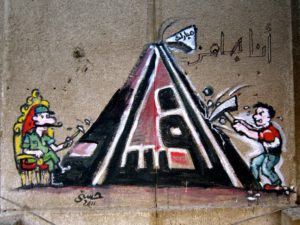 However, President Al Sisi’s words and actions are far apart. After Hisham Geneina, the former head of the Central Audit Organization, publicly stated that the government’s corruption has cost Egypt around $67.6 billion over four years, he was fiercely attacked by pro-government political and media circles.

The Egyptian presidency quickly formed a committee to investigate the numbers. There are clear indications that Geneina was on the right track. Egypt scores 36 out of 100 and ranks 88th out of 168 countries on Transparency International’s 2015 Corruption Perception Index, indicating a serious problem with corruption. Geneina’s estimate may even have been on the low side. Back in September the state-run Central Agency for Public Mobilisation and Statistics estimated corruption cost Egypt $25 billion annually.

Shortly after Geneina’s announcement, President Al Sisi sacked him by presidential decree, and within a few days, the prosecution of Geneina started on the grounds of disturbing public peace and spreading false news.

The character assassination and prosecution of the head of Egypt’s strongest oversight body is a dangerous step for three reasons.

First, it shows yet again that the Egyptian government has no real political will to fight corruption despite previous promises. They should. Egyptian citizens are frustrated with the government’s lack of serious effort to stop the widespread corruption in the country. In a recent survey released in May this year, 58 per cent of Egyptians believe that the government is performing badly on this front.

Second, such move deeply undermines the independence of Egypt’s regulatory bodies. The Central Audit Organisation is the strongest watchdog institution in the country and scored the highest among 13 pillars of society studied in Transparency International’s National Integrity System report.

The report looked at the strengths and weaknesses of Egypt’s institutions. The strength of the Central Audit Organisation stems from its independence, which is enshrined in the Egyptian constitution. The removal of its head by presidential degree is also an explicit infringement of the constitution. It weakens the organisation’s independence and credibility, and hinders its key function to detect and report corruption.

Third, targeting Geneina signals an escalation of a wider suppressive crackdown on Egyptian civil society, activists and concerned citizens. By prosecuting the country’s top anti-corruption fighter for merely doing his job, the Egyptian government is reinforcing its power to limit transparency or accountability to its citizens.

The Egyptian government must uphold the obligations it agreed to when it signed the United Nations Convention against Corruption in 2005. This commits Egypt to a framework for fighting corruption that includes guaranteeing independence to investigating authorities, such as auditing organisations.

The government should strive to end decades of corruption that brought millions into the streets demanding social justice and not act to cover up its shortcomings.