The Deal in Doha

On Friday the 13th, the Doha deal on the UNCAC review mechanism was concluded! (Resolution L9). The deal was adopted by approximately 106 States Parties represented at CoSP3 —another 14 governments were there as observers. It’s a landmark in establishing the first ever UN peer review mechanism. But its not a deal to celebrate — how could we celebrate an anti-corruption mechanism that is allowed to operate in secrecy on a government-to-government basis? A review process with no requirements of non-governmental inputs, no required country visits, no expert review body, no required publication of reports (only of summaries). All optional! The outline of this mechanism flies in the face of the essentials of anti-corruption — transparency, public participation and accountability. And it departs from best practice in other anti-corruption mechanisms. It’s clear that some of the governments represented in Doha are not committed to advancing the fight against corruption and they won this round, the Doha round. 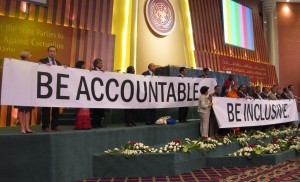 Call on governments: Be accountable!

It was not entirely unexpected that the countries that are opposed to an effective review process scored all the points and we ended up with Resolution L9 on the Review Mechanism. Why? Because they held the better cards. Blocking is the easier course when the rules of the game say there has to be consensus. And consensus is the general rule at these UN meetings on UNCAC. Unless you want to force a vote. But that’s a whole other can of worms.

So what was the upside of Doha?

The Coalition’s efforts there sent a message to governments: We are here. We are informed. We are watching. And we are not going to give up on advancing the cause of transparency and accountability nationally and globally. We came away stronger, more united and more determined.

And looking at another positive side, let’s remember to commend a few Governments that included NGO representatives in their delegations to the Doha meeting, namely, the Governments of Benin, Guatemala, Kuwait and Morocco. By doing that, they helped to chip away at the barriers of secrecy that ironically have characterised UNCAC-related meetings. But sadly, representatives of many smaller countries were themselves excluded in Doha from major parts of the “informal informal” negotiations, so that the deal-making was also hidden from their view.

Apart from that — the fact that there is now a review mechanism, albeit flawed, is a small step forward in a process that can evolve. We can turn this lemon into lemonade. It’s up to us now, citizen’s groups around the world, to make sure that our governments do the right thing, don’t opt out from transparency and civil society participation. It’s up to us to do the hard work of making independent assessments to input into the review process — and since we may not be able to input them directly to review teams, we’ll have to make sure to publish them on our websites. If our conclusions are different from the official “summary reports” then we’ll need to make sure to highlight that too. The five-year review cycles established by Resolution L9 mean that about 30 countries will be reviewed per year — and the focus in the first round will be on crime and punishment, on what states are doing to penalise acts of corruption and how they are cooperating in international law enforcement.

Citizen’s groups around the world should also keep in their sights the planned annual meetings of the UNCAC Implementation Review Group that will take place in Vienna as well as the next Conferences of States Parties scheduled to take place in Morocco in 2011 and Panama in 2013 – all of them potentially big talk-shops of mainly touristic interest. And then there will be an additional six meetings in Vienna of working groups on preventive measures, asset recovery and technical assistance, between now and the 4th CoSP in 2011. Let’s bring to those meetings our reports on country compliance. Let’s report on which countries are doing the right thing in the review process. Let’s put a spotlight on those events like we did in Doha.

Perhaps it’s apt to conclude with a couple of sayings from the African continent in relation the issue of civil society participation in the UNCAC review process.

A Kenyan delegate in Doha told us: “The eye sees but cannot see itself.”

A Cameroonian Justice Ministry official who was there said: “Il est bon de pouvoir entendre plusieurs sons de cloche.” (It is good to be able to hear many bell sounds.)

There are many ways of saying it. Let us hope that this irresistible logic gains an irresistible momentum and that governments exercise the option to make the UNCAC review mechanism becomes as transparent and inclusive as an anti-corruption mechanism ought to be.