Fighting corruption can take many forms. But often, the victims of corruption are being forgotten. With its Advocacy and Legal Advice Centres, Transparency International has started providing legal advice to these victims all around the world.

Together with my colleague Ervin, I would like to start this series on the blog to tell you about the Advocacy and Legal Advice Centres run by our local organisations in the Africa and Middle East region. In this blog I want to share stories of the courageous people that come to these centers and the committed legal advisors and coordinators that assist them.

A couple of weeks ago, I travelled to Ramallah, in the Palestinian Territories. This is where one of the most successful Centre is run by AMAN, the local chapter of Transparency International. After being launched in April 2009 already more than 1600 people have called the established hotline to seek advice on a case of corruption.

Some amazing results have been achieved. Here I would like to share with you one that I think illustrates why these Centres are so important and relevant.

One of the people that contacted the Centre was Nizam, who came to the center to complain about a problem with health benefits.

With an unemployment rate of 16.8 per cent, and work opportunities impeded by movement and access restrictions, workers’ unions in the West Bank are meant to protect the interests of employees. But when Nizam (not his real name) contacted his local union with a question about health insurance, he found that instead of protecting his interests, the union director told him to pay a fee of 80 NIS (US $ 21) for a health insurance service that Nizam later learned should have been free.

Nizam contacted Transparency International’s newly opened Palestine Centre in the West Bank. He explained what had happened, and expressed concern that others might also be being exploited. The Centre reported his case to the Minister of Labour, who began an investigation which revealed that other workers’ unions in the West Bank had also unfairly charged workers for free services. The Ministry of Labour wrote to all unions warning them that this practice was illegal and that any unions found continuing this practice would face penalties.

As well as helping Nizam secure a fair deal on his health insurance, Transparency International Palestine and the Ministry of Labour published information explaining the health insurance system, to increase public awareness of the registration procedure. 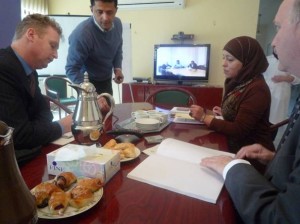 videoconference with newly established ALAC team in the Gaza strip

Just recently in March, a new Centre was opened in Gaza. On the picture below you can see how a videoconference was held to discuss its progress (videoconferencing is used for this as it is obviously not possible to travel from or into Gaza).

Over the next few months I’ll share more and more stories from the Centres in the region with you, to highlight the continuous need for fighting corruption, and the difference that can be made.