Corporate responsibility and anti-corruption – Is there a case for greater integration?

It’s impossible these days not to notice the steady stream of news coverage on bribery and corruption scandals from the pages of financial papers like the Wall Street Journal and Financial Times into mainstream media and the blogosphere. Bribery allegations, prosecutions and record-setting fines, many of which involve corporate titans, are reported in the press almost daily.

These headlines are tracking a recent (and positive) trend towards increasing enforcement of laws criminalising foreign bribery, particularly by leading exporters such as the US and Germany. The recent passage of the new UK Bribery Act, which has been called the “toughest enforcement standard in the world” is another milestone in this process. But increased prosecutions and news coverage has meant that company reputations are being battered, further undermining the public’s shaken confidence in business, following Enron et al and the financial crisis of 2008.

Curiously (or perhaps not so curiously), at the same time, the corporate responsibility movement, which was discounted by many as just another passing fad not so long ago, seems to be taking root. Pressure from stakeholders, socially-responsible investors and, in some countries, by legislators, are helping to lend more substance and coherence to corporate responsibility.

There is no question that greater enforcement is causing responsible companies to strengthen measures to deter and detect bribery and corruption in their operations. I’ve heard a compliance expert refer to this as the “Siemens effect”. The same companies may also be working to build their profile as responsible corporate citizens with the help of a comprehensive corporate responsibility strategy. It’s likely, however, that these efforts are taking place in parallel. In most companies the anti-corruption function sits in the compliance department whereas the corporate responsibility function is carried out by a dedicated unit or by the external relations department — and these may not communicate very closely. 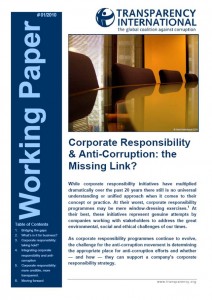 Greater transparency of corporate responsibility efforts, including efforts to deter bribery and corruption can be achieved through improved reporting. TI’s own research findings, published in the study “Transparency in Reporting on Anti-Corruption: A Report of Corporate Practices” has shown that anti-corruption reporting remains weak among companies. Although the Global Reporting Initiative has helped create a framework that enhances coherence and comparability in environmental, social and governance (ESG) reporting, the corruption indicators remain too limited. TI and the UNGC have recently published detailed reporting guidance on the Global Compact 10th Principle which all participating companies and organisations will have to use within a few years. This could become a standard for anti-corruption reporting.

An emerging trend which may help raise the bar on corporate responsibility reporting is the mounting call for integrated reporting. A new book, titled ‘One Report: Integrated Reporting for a Sustainable Society’ analyses an emerging trend towards the integration of financial and non-financial information into a single report.

I’m not advocating that anti-corruption be subsumed into the corporate responsibility agenda but if companies are to become genuinely responsible corporate citizens, should anti-corruption efforts not be more closely linked to the broader ethical stance of enterprises?