Extractive Industries: The challenge of disclosing where the money goes

From April 15-16, 2010 the board of the Extractive Industries Transparency Initiative met in Berlin. Eduardo Bohorquez, head of the Mexican TI chapter and board member of the EITI, as well as François Valérian, head of Private Sector Programmes for Transparency International, were there (version française versión en español) 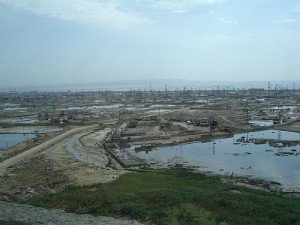 Oil wells in Azerbaijan: Where does the wealth go?

April 16 marked a decisive day for the Extractive Industries Transparency Initiative (EITI), a sister organisation to Transparency International set up to stop corruption in the energy sector and the extractive industries. The board of EITI, which is made up of people from industry, government and civil society, took the delicate decision to eject two countries for failing to comply with its guidelines, and gave 16 others a deadline extension of only six months to shape up.

This is pretty big news. EITI was founded in 2002 expressly to help poor people in resource rich countries get the benefits from the money their governments receive for the exploitation of their natural resources. The goal, in a word, is to eliminate what is known as the resource curse: persistent poverty in countries that have significant supplies of valuable natural resources.

Countries who wish to enjoy the “EITI compliant” status have two years to set out how they will make disclosures on the amounts of money they receive for oil, gas and mineral extraction and have these independently verified.

That is what Azerbaijan and Liberia have already achieved; proving that two years can be enough to complete the process. They are the first two countries worldwide to have done so and this has helped enhance their profile in the international investment community. Where there is political will, there is a way.

Some countries, however, are reluctant to comply because this kind of transparency helps citizens hold their governments to account for the money they receive. The more transparent the reporting process the harder it is for corrupt officials to misuse public funds.

Sixteen countries that were granted limited deadline extensions had to argue convincingly that there were “exceptional and unforeseen circumstances” that kept them from complying. The board thoroughly reviewed each one of the cases and finally agreed on the six-month extensions. Only Equatorial Guinea and Sao Tome y Principe were ejected.

The difficulties expressed by the countries that found the two-year validation process too short reinforce the global need for accelerated country-per-country disclosure of payments in corporate practices, stock exchange regulations and recommendations of the International Accounting Standards Board. If country-per-country disclosure was a global standard, countries would already have frameworks in place that made reporting and verification easier.

Six months from now EITI will have further tough decisions to make. We hope that this message to governments will translate into action and that candidate countries rapidly disclose their extractive industry revenues and have them verified. EITI takes this new deadline very seriously; we expect each one of this group of 16 countries to do the same.

We found most companies do not report sufficiently though some do, showing that it is possible. Our 2011 PRT report will measure progress and continue our call for corporate country-per-country reporting as well as governmental transparency.