Sometimes it’s the easy solutions that could turn out to be effective in reducing bribery and corruption.

Take one of the most common forms of corruption: bribing the police (as found in the Transparency International’s 2009 Global Corruption Barometer, the police is the institution people are most likely to bribe. Almost a quarter of people who had contact with the police in the previous year reported paying a bribe.).

The Indian NGO 5th Pillar came up with the brilliant idea of handing over Zero Ruppee notes to public officials in protest for being asked for a bribe. In Nepal, airline staff pockets have been banned to “curb irregularities”. Now, Russian provider of electronic kiosks that cash-in money automatically, Qiwi,  has added a traffic fines payments service to be paid through its machines.

As Elena Panfilova, head of our chapter in Russia, puts it in the article:

“Our polls clearly state that most Moscow drivers didn’t like paying fines hand-to-hand, in cash and on the roads. But they still do it because nobody has time to wait in bank lines (to pay the fines).” 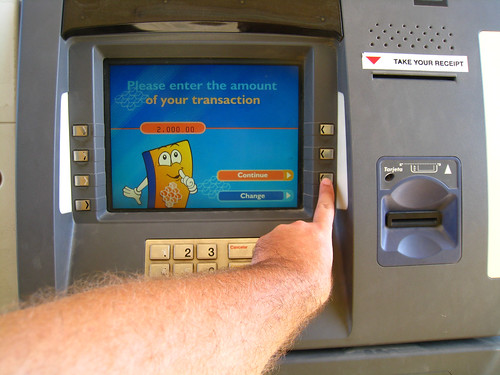 Adding some more functions to the good old ATM

The automated system could save drivers’ this time and therefore potentially reduce the number of bribes paid on the streets. The machines provide also a good alternative when looking at low levels of internet or e-commerce in general.

Non-cash options to paying fines or services reduce intermediaries and are becoming increasingly popular. In Kenya, the mobile payment service M-Pesa has been become a success story (an interesting background look at its background logistics on the Economist), and could give way for reducing corruption in services such as water delivery.

Do you know of any other easy solutions to reduce bribery?