Flattening the pyramid; the struggle to reform Egypt’s political system

This weekend marked the fourth month since Mubarak resigned from his position as President of Egypt. The day that he stepped down from power will enter history as a turning point for Egypt and the Arab world.

But Monday also marked an anniversary that may be equally decisive for the history of the revolution and the fate of the country. On June 6th 2010 Khalid Said died after being arrested and beaten by two police officers on the streets of Alexandria. According to his family, Khalid was targeted by the officers after he posted video footage implicating police members in a drug deal. 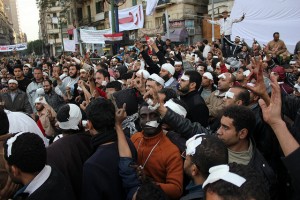 The brutality of the attack shocked Egyptian society. But the response of the government caused even deeper outrage; even after international critique led to a public investigation, the trial was postponed almost as soon as it had begun and subsequent demonstrations were either suppressed or ignored.

The public anger and fear generated by the event were reflected in the popularity of the Facebook memorial site, entitled in Arabic We are all Khalid Said. It attracted over a million followers and became a focal point for dissident discourse. When the founder called for protests on January 25th (National Police Day and a public holiday), thousands responded. And when the government still failed to respond to protestors’ demands for accountability and rule of law, the thousands became millions. The demonstrations around the country and in Tahrir Square led to the departure of the president.

The Ministry of Interior seriously misjudged how to react to the open and continued abuse of power by its employees. The mutual hostility between the people and the police forces was reflected by the number of police stations that were burned during the demonstrations and by the brutality with which police responded to the initial protests. There were renewed demonstrations across the country this week to mark the anniversary of Khalid Said’s death. In the new post-revolution Egypt, can the relationship be improved?

On both sides, there are signs that the will is there. Official and non-official Facebook sites have been established to emphasize the commitment of the police to the people and encourage dialogue about police conduct. They have been inundated with expressions of support as well as critique.

This week a brochure clarifying the rights and duties of citizens in relation to the police was published, and the trial of the officers implicated in the death of Khalid Said has been continued, with a verdict expected in July.

However, these initiatives will remain cosmetic without a long-term and comprehensive reform of the structure defining the role of the security forces in Egypt. Most security officers only know the emergency law that has been in place since 1967 and need to understand the limitations of their power that a lifting of this law would bring. 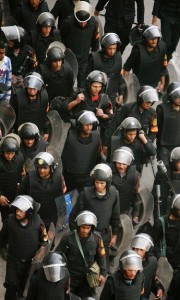 The elite standing of the police and security forces in general effectively prevents the appointment of members of socially disadvantaged classes, which in turn increases mutual suspicion and hostility. And the high number of cases tried in military courts and other special courts answerable to the Armed Forces further increases the stranglehold that the State Security Forces hold on Egyptian society.

Increasing the competences and independence of the judiciary would empower it to process cases quickly and fairly, whilst the establishment of genuinely independent anti-corruption bodies would allow trained experts to review conflicts of interests and abuse of power. Whether policemen or politicians, public officials accused of abusing their position must be submitted to transparent and public trials in order for the state to win the trust of the people.

The government of Egypt won’t be able to build democracy alone. It needs the support of the international community, a point that Cobus de Swardt, managing director of Transparency International, underlined in his article for Arab daily Al-Sharq al-Awsat.

Far more important than this however, is the support and participation of the Egyptian people; without a genuine role for civil society in the political and social dialogue, post-revolution Egypt will be little different from the Egypt that came before. Our work in the country, both before and after the revolution, found enthusiastic and committed supporters. They only lack the entry point for their participation in political life.

Creating a horizontal rather than a vertical political system, with openings for the people, and without loopholes that allow political interference from above, will win the trust that the death of Khaled Saeed so painfully destroyed. Not only that, it will also unlock the potential that the Egyptians hold to transform the country in which they live.