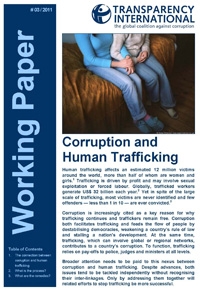 In June the New Yorker published a story about Fijian women who had been trafficked to U.S. military camps in Iraq. Those women, among thousands of others, were promised a very lucrative job in Dubai by a local recruitment firm.

Once on the plane, they learned that were being shipped to a war zone, where they would earn less than 25% of what they were promised and live in unbearable conditions.

These subcontractors, employed by the U.S. government, were mandated to supply local workers to gradually replace the U.S. military on the field as part of the long-term withdrawal strategy. Instead, they developed a sophisticated and complex network of trafficking of third world workers with the help of immigration officials, police forces, and many other accomplices.

In most of the cases of human trafficking, a very broad spectrum of private and public officials originating from various sectors are involved in the process of trafficking.

These links between the actors and the traffickers usually seek to secure a form of complicity, active or passive, which will ensure his or her impunity when arrested – that amongst other motives.

The Fijian women’s stories clearly depict the urgency to look closer at the undeniable link that bonds corruption and human trafficking and to approach it as one joint issue rather than two single ones.

These efforts should also aim to educate, raise awareness among and seek leadership and political support from the international community as well as the civil society.