Last week marked an exciting event for the freedom of information campaigners in Kenya. On July 8th the country has launched an open data portal, which makes Kenya the first African country to release government data to the public through a single online platform.

The portal aggregates information from various government agencies on budget spending and funds allocated for constituency development, as well as parliamentary proceedings and detailed statistics on demographics and service delivery, such as school enrollment rates, access to electricity, water and sanitation.

The portal allows average users to download information both on computers and mobile phones and compare data at national, province and county levels. Although there are only 4 million internet users in Kenya, which is a little under 10% of the country’s total population, the number of cell phone users is at least five times higher and continues to increase rapidly. 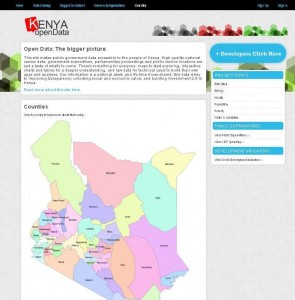 If you want to know how much money is allocated for health and education projects in your constituency, you can now access the budget of your community development fund online, something that was not possible before. The allocation of these funds has traditionally been viewed as very nepotistic, which is why it is critical that journalists, civil society and ordinary citizens can now seek, use, reuse and question this information to hold their government to account.

Access to government data has long been demanded by the civil society in Kenya, the country which is receiving $1.7 billion in foreign development aid and where corruption remains rampant. The creation of the portal is a significant step in the right direction and will hopefully serve as a good example of championing open data in Africa, even if the government still needs to demonstrate its full commitment to transparency by introducing the Freedom of Information Act, as mandated by the new constitution Kenya adopted in 2010.

This example demonstrates that even without proper legislation in place there is nothing that prevents governments or separate public agencies from publishing data if its disclosure is not explicitly prohibited. Examples like Brazil, suggest that as a good practice of transparency, government agencies can make data on budgets, procurement and election financing available and easily accessible online.

However, those really digging into government data know that publication alone is only part of transparency. Citizen friendly platforms for accessing public data are important. The whole point of open data is to make information easily searchable and usable for general public, even if they do not necessarily have advanced technical and research skills. Even those African countries well recognized for online transparency, such as South Africa, tend to make their government documents available in formats that are hard to process and compare, such as pdf. Publishing data in open, machine readable standardized formats is essential and this is where the real advantage of the Kenyan portal could lie.

In addition, creation of a single well known online access points can help citizens to find information more easily. Such portals should not replace the information that is being displayed on separate government websites, but rather compliment it, since search across different sources might not always work well.

Again, this is just the start. It remains to be seen what the uptake of the portal will be among the Kenyan civil society, media and general public but from what I have seen from a quick browsing of the website, there could be a gold mine of data to dig! Hopefully, other countries of the continent will soon follow the suit.

What are your experiences of trying to access government data online?