The #spanishrevolution of the Movement 15-M

In May 2011, thousands of protesters in Madrid came together to demonstrate for change in the political and economic and social system of Spain. The protests rapidly spread across the country and even crossed the border to various European cities.  Organized through social media platforms, like Twitter and Facebook, the demonstrations were compared to the unrest in the Arab countries and ironically received the name: #spanishrevolution. 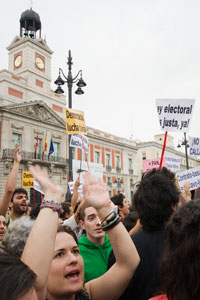 The Movement 15-M, referring to the start-date of May 15th, took shape through the civil digital platform Real Democracy Now! The platform voices its concern with the high unemployment (over 20% of the working population and youth unemployment even over 40%), welfare cuts, and a cartelized and oligarchic political party system in Spain.

Political corruption is also a major issue. While the protests do not have a clear-cut agenda, several demands reoccurred during the course of the protests: electoral reforms, better political representation and fair measures to combat the economic crisis. A slogan of the movement states: ‘Europe for the citizens and not the markets, we are not commodities in the hands of politicians and banks’.

The protesters have been resourceful in keeping the rallies peaceful; however, some violent outbursts have threatened to undermine their cause. Nevertheless, the movement, characterized by young participants, can be considered politically and socially engaged and dedicated to transform the country.

TI-Spain closely monitors the developments surrounding the Movement 15-M and especially their view on political corruption. The protesters seem to have a holistic as opposed to a legalistic view on what constitutes corruption. Unethical behaviour within legal boundaries is still considered corrupt.

In Spain there is little official information and academic research on practices that could be viewed as corrupt and the stats on convicted cases do not necessarily reflect reality of corruption. Terms like ‘undue influence’ and ‘legal corruption’ do not contribute to popular trust in governmental institutions.

Therefore, research institutes, including TI Spain, measure perceptions of corruption in order to provide a solid overview. This can be based on quite simple and straightforward country comparisons of citizens’ opinions of the frequency of corrupt behaviour. In Spain research has shown that 46.8% perceives that corruption among politicians is very extensive, 39.8% quite extensive and 0.4% that there is no corruption (Spanish Centre of Sociological Research, 2011).

The Movement 15-M has created an opportunity for TI Spain to advocate anti-corruption measures on the political agenda. In the running-up to the national elections in November 2011, the pressure of the movement has already contributed to reform proposals of one the candidates running for office, Alfredo Pérez Rubalcaba (Spanish Socialist Workers’ Party , PSOE).

The PSOE’s campaign programme now includes electoral reforms in order to increase accountability of deputies and improve the proportionality of the parliament. Besides, Rubalcaba also insisted on the prevention of corruption in urban-planning (a common breeding ground for corruption in Spain) by shifting the municipal responsibilities to the national level and strengthening scrutiny mechanisms, a development supported by TI Spain.

TI-Spain will continue to monitor the developments in the fight against corruption. By the end of 2011, an assessment of transparency in Spanish governmental institutions (our National Integrity System study) will be published. For more information, please click here.