Will Portuguese privatisation pay the bills?

Portugal aims to raise €7 billion through privatisation as part of the conditions of its €78 billion IMF-EU bailout. Portugal’s Luis de Sousa, Chairman of TIAC, our national contact point in Portugal, talks about their efforts to maintain transparency as Portugal implements the conditions of its bailout.

This March saw large public protests and demonstrations in Portugal. What drove people onto the streets?

Among the various problems our country is facing, people felt that their leaders had been dishonest about the level of sovereign debt in the country. The painful measures such as across the board tax increases needed to fund the bailout were also a factor. “Stop corruption” was a common cry among the protestors, and a message written on many big banners carried by the crowd. 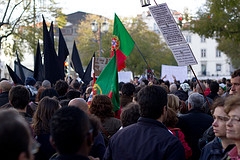 Many of the protestors were young people: first time job seekers with a high level of education. In the Portuguese job market, hiring by merit is not standard procedure: knowing someone who can pull strings for you is still a common practice, even in job competitions for recruitment in the private sector or local/regional government.

While lack of transparency was a big factor in the sovereign debt crisis, it also threatens to cause problems with the bailout? What are your concerns?

The IMF-EU-European Central Bank “Troika” are putting a lot on Portugal’s plate as a price for the bailout: reducing state ownership in public companies through privatisation, reviewing public private partnerships, restructuring of the armed forces and downsizing of the public administration including local government, changing budget practices and reducing staff in the public sector.

Some of these steps have merit, such as greater budget transparency, but others raise concerns (e.g. privatizations, renegotiation of PPP), especially when such huge and important changes are going to be carried out in such a tight time frame. Major reorganisations of local government will happen in a matter of weeks, and many of there authorities have transparency issues already.

It is in the public interest that any sales of public assets – the energy company, the state airline, the nationalized banks, and the State’s golden shares will all go under the hammer – get the best value, but these are not the ideal conditions for that, so the sales have to take place in the full glare of the public eye.

What we need to make sure this happens is an anti-corruption strategy overseeing the whole process. Another thing needed is better coordination of investigation: Portugal has a poor record of corruption convictions in particular those involving political actors, senior public officials and big business. The majority of corruption cases are dismissed without sufficient evidence.

In July you had a meeting with the IMF-EU troika managing Portugal’s bailout conditions to talk about corruption risks. How did that come about?

We knew the troika were coming and we knew what was on the menu. We are particularly worried about conflicts of interest in privatisation processes: where the wrong outcome can come about to satisfy personal interests.

We want any sales of public assets to be monitored by an independent committee that includes civil society and experts, not just ministers, officials and other people hand-picked by government. We made a set of recommendations about the most sensitive areas where there were the biggest corruption risks and sent it to the troika and they gave us a few minutes – standard operating procedure for the troika.

After the meeting however, one Troika staff member said that he had received many local and state officials and all were pushing the blame elsewhere, so they were pleased that we started opening the box on corruption at local and regional level.

The journalists were waiting outside the building after our meeting. That was the day when the Troika submitted the conditions for the bailout, so that was the first news item of the day, but the second item was about our meeting and our concerns about corruption (links in Portuguese). For the next few days there were a lot of reports about the government’s lack of response.

What happened after the meeting?

We worked quickly with our partners to prepare a set of recommendations and sent them to the IMF, the government and parliament. A few weeks later we received a letter from the president of the parliament, thanking us for the paper and telling us that it had been sent to all party groups and committees.

The government, however, only acknowledged our contribution after it had been systematically reported in the Portuguese press and discussed by TV and Radio commentators.

I don’t think the government has taken us seriously. In Portugal, decision-makers tend to snub NGOs on sensitive policy areas. They are not used to having civil society participating and scrutinizing their meetings. Consultation procedures are still quite poor.

A full two months later our document had been presented to the troika and the Portuguese authorities (i.e. parliament, government and president), the recently created Corruption Prevention Bureau (Conselho de Prevenção da Corrupção) issued a press released corroborating part of our claims and recommending the government to carry out some risk assessments and set up special committees to follow-up privatization processes.

Although this comes late in the day, we are pleased for this additional push and still want to see stronger controls being implemented. Until now our feeling is that the government is responding to our pressure by adopting symbolic measures.

The IMF have since warned about the risks of corruption in privatisation in Greece and Portugal (article in Portuguese, see also page 47 of this recent IMF report).