Bribe Payers Index 2011: When trade is anything but free.

As the G20 prepare to meet in Cannes, Transparency International’s new report serves as a timely reminder of some unwarranted consequences of trade and investment and the need for a global effort to stop corruption in all its forms. Deborah Hardoon, Senior Research Coordinator, discusses the global impact of the countries ranked in the 2011 Bribe Payers Index.

As trade and investment cross borders, bribery, illicit financial flows and stolen assets can too, unless there is a global effort to stop corruption in all its forms.

Today, Transparency International publishes the 2011 Bribe Payers Index. The index is a reminder that bribery and corruption are a global issue. It deliberately focuses on suppliers of bribes: companies from the wealthiest countries that use bribery in their international business dealings. The Bribe Payers Index holds both these companies, and the countries they are from, to account for their role in providing the financial incentives that propagate bribery and corruption around the world. 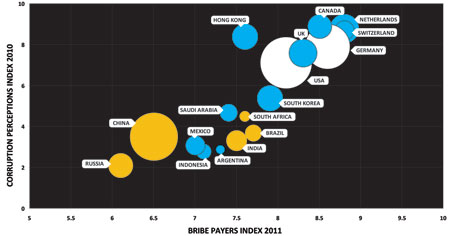 The index is important not only for the countries ranked in the Index; but in today’s globalized world, the findings reflect an impact that can be felt by everyone.

The trade and investment originating from these wealthy countries finds its way to all corners of the globe, as do the bribes paid as part of these business transactions.

And with no country scoring a clean 10 on the Bribe Payers Index 2011 it is clear that companies from all countries ranked are perceived to engage in bribery abroad to some extent.

The chart above plots the scores of the 28 countries ranked in the Bribe Payers Index against their scores on the 2010 Corruption Perceptions Index.

Each country is represented by a bubble, scaled to the value of that country’s exports plus investment in foreign countries, which is an indication of the size of these countries’ impact in the rest of the world.

The United States and Germany, two of the world’s biggest trading nations, represented by two of the biggest bubbles, have been coloured white. Companies from these countries do business abroad on a massive scale, and their business practices are of great influence in the rest of the world. Neither is immune to corruption.

Transparency International’s 2011 progress report on enforcement of the OECD Anti-bribery Convention details a number of high profile foreign bribery cases from both Germany and the United States and it is encouraging that these same governments are taking foreign bribery seriously and prosecuting cases.

In other big economies, where views point to even greater bribery risk by companies abroad, governments are much too slow in their pursuit of cases.

The bubbles representing the emerging BRICS countries (Brazil, Russia, India, China and South Africa) have been coloured yellow. The size of China’s bubble is now bigger than Germany’s, and economic growth in all the BRICS countries is forecast to exceed that of the US and Europe in 2011.

Given the continued growth of these countries and their associated global footprint, the fact that they sit at the bottom of both the Bribe Payers Index and Corruption Perceptions Index is a concern for all of us.

Companies from emerging economies are bringing innovative and cost effective goods and services to the global market place. As these companies and countries continue to grow, more resources have become available to invest overseas, particularly in natural resource industries in the developing world.

These investments not only facilitate access to the core commodities necessary to sustain the BRICS economic growth, but also create jobs, transfer skills and develop infrastructure in the host country. There are many benefits to be gleaned from these trade and investment flows, both for the BRICS and for the countries they trade with.

However, if bribery and corruption comes as part of the package, countries on the receiving end have a lot to lose too. If the package includes incentives for officials to be corrupt, if it manipulates local markets and threatens the quality of services, then the consequences of doing business with these foreign companies can result in significant and lasting damage in recipient countries.

In a world where we are still struggling to recover from the global financial crisis, where businesses are seeking opportunities wherever they can to sustain themselves, it is vital that we recognise that there is a right and a wrong way to do business.

The wrong way includes resorting to bribery, which is costly not only to the business paying the bribe, but also has a high and lasting cost to the society where the bribe is paid.