When your shop is bulldozed with the police watching on

This is the story of a citizen who came to the centre in Azerbaijan. Low levels of transparency in Azerbaijan threaten to put small time entrepreneurs like Kerem out of business. TI Azerbaijan has sought to address this particular issue by proposing the law be changed to state that if a citizen does not receive planning permission within the legally prescribed time frame, the request should be considered settled in the citizen’s favour.

Kerem (names have been changed) was a shop owner who had tried in vain to secure planning permission from local authorities had to watch as they bulldozed his store. 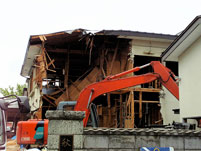 As far as Kerem was concerned, he had done everything by the book. He bought a plot of land and applied for planning permission to build a shop. When the local authorities failed to respond to his application within the obligatory 30-day period, Kerem contacted them again, and again heard nothing. So he turned to the head architect of the region, responsible for approving this type of construction. Kerem claims the architect assured him he could go ahead with the construction of his shop, as he had already applied for permission. In Azerbaijan, when local authorities do not respond in the obligatory time period, it is common practice to do this and re-apply afterwards to have the property legitimised.

Two months into trade, Kerem was told by the very same architect that his shop had been built illegally, and that it would have to be knocked down within two days. By law, Azerbaijani authorities can only demolish a privately owned building with the owner’s permission, or a court ruling. Kerem demanded to see an official demolition permit but received nothing. His shop was bulldozed shortly thereafter, with the local authorities and police watching on.

In a surprising turn of events, the authorities then offered Kerem financial compensation for the destruction of his property, and said they would exchange his plot of land for another much bigger one. But this second plot was located away from customer traffic and so was unfit for Kerem’s purposes.

Angry, Kerem took his case to court. After losing both his initial case and a subsequent appeal, he turned to Transparency International (TI) Azerbaijan. They forwarded an appeal to the State Anti-Corruption Commission, who in turn contacted the regional authorities. Kerem was later granted permission to rebuild his shop, and received free building materials as compensation.

This case is one of thousands processed by Transparency International’s Advocacy and Legal Advice Centres. The centres, now in more than 40 countries, provide free assistance to victims and witnesses of corruption, helping them to pursue their complaints.