The wave of protests that spread through the Arab world this spring drew international attention to the problems of corruption and nepotism in the region. This is confirmed by the findings of the 2011 Corruption Perceptions Index. Arwa Hassan, Senior Programme Coordinator in Transparency International’s Middle East and North Africa department, discusses the challenges ahead.

It comes as no surprise that the discontentment felt by many in the Arab world is reflected in this year’s Corruption Perceptions Index. Most countries affected by the “Arab Spring” score poorly, in many cases carrying a score of less than four on a scale from 0 to 10 where 0 means highly corrupt and 10 means very clean.

The message is clear, but will the new administrations in countries such as Egypt and Tunisia be able to tackle the problems of unaccountability, nepotism, wide-scale corruption and the ensuing economic injustice, which was a key cause of the uprisings? 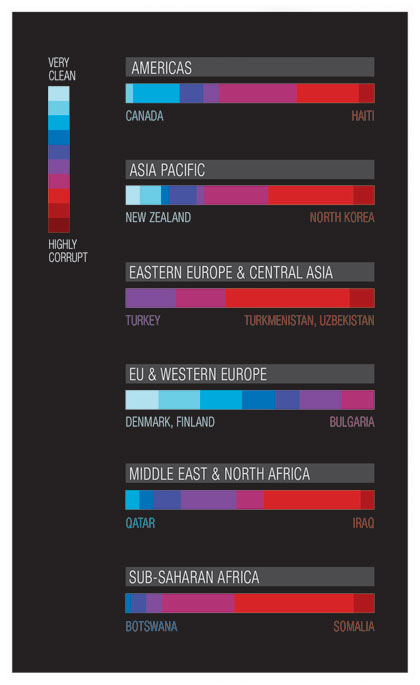 The deep-seated problems that drove people to the streets will not disappear overnight. Recent developments in Egypt, where the military used the same strong-arm tactics of the deposed dictatorship, have demonstrated that if those in power do not take steps to effectuate real change, the problem will not go away.

Both Libya and Yemen are amongst the worst performers in this year’s index. This reflects the low level of civil society participation in public life, deep-seated nepotism and the prevalence of a small elite with its grip on economic power. Although resource-rich, profits did not translate into benefits for the populations of the respective countries.

The Arab world is diverse but there are certain common trends across the region.

Although legislation that would lead to anti-corruption reforms exists, it is not enforced. In Lebanon, for example, although there is more room for civil society participation than in many other Arab countries, deeply entrenched nepotistic networks make it difficult to get things done without connections, and thus Lebanon’s poor score of 2.5 is not surprising.

Interestingly, we note that Iraq, which has enjoyed relative stability, scores extremely badly (1.8), which reflects the high level of corruption in the public sector and people’s low level of faith in many of the country’s institutions, which are poorly run.

Other MENA countries with relatively better scores cannot afford to be complacent. The Gulf States tend to be better at distributing the country’s wealth amongst the populace, but pockets of extreme poverty and human rights abuse still persist (as in Bahrain, for example), and criticism of the ruling powers is rarely tolerated.

As many rulers in the Arab Gulf are discovering, economic comfort and stability is not always a substitute for free speech and a society where individuals can develop their potential.

This year’s index delivers a sobering message to those in power in the Arab world, echoing what the Arab street has been saying. Never before has the need to act, and to implement wide-ranging reforms, been so pressing.