Latin American elections: How to use social media to promote transparency

Marta Erquicia, Senior Programme Coordinator in the Americas Department of Transparency International, explains how new technologies can be used to oversee political processes.

Several presidential, regional and municipal elections were held between October and November in Latin America: In Argentina, Cristina Kirchner won by an overwhelming majority; in Guatemala, for the first time after the dictatorship a former member of the military was elected; in Nicaragua, Ortega was re-elected amid accusations of irregularities; and in Colombia, voters endorsed the position of President Santos.

As part of these electoral processes, TI chapters have implemented various strategies based on the use of new technologies and social media to engage citizens and ensure fairness and greater transparency of campaigns and elections.In Argentina, Poder Ciudadano waged the campaign Quién te Banca (Who is supporting you?) to provide information to citizens on election campaign spending, such as how much funding is received by candidates, the origin of the funds, etc. Citizens were asked to send photos of election campaign posters via sms, Twitter or Facebook. Poder Ciudadano processed the data received and submitted requests for information regarding the origin and allocation of the funds.

www.votainteligente.com.ar is a website launched jointly with other organisations which contains information on the election programmes of candidates and seeks to promote a culture of transparency in political debate. Vota Inteligente included the Facebook application Media Naranja, helping users identify the candidate that is closest to their preferences based on a series of questions. 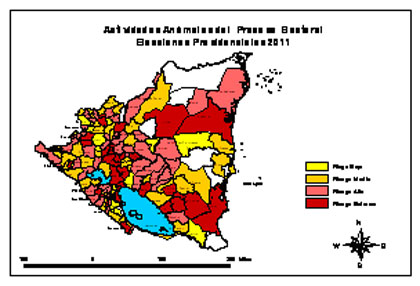 Etica y Transparencia launched www.vivaelvoto.com. Nicaraguans were able to oversee and report anomalies and violations of political and civil rights, and to demand clean and transparent elections. Issues reported through the Ushahidi application in the website included: impediments to voting due to delays in the delivery of identity cards, polling stations that were closed, or the use of State assets for partisan purposes.

In Guatemala, Acción Ciudadana based its strategy on the use of social media. They created a special website for the electoral process, the Mirador Electoral (Electoral Overlook), and used their Facebook and Twitter platforms to support their communications strategies.

The single most relevant issue during the elections in Guatemala was the use of these tools to create the National Network for Electoral Observation and Quick Vote Counting (Red Nacional de Observación Electoral y Conteo Rápido), and the promotion of the Ushahidi complaints system, which received more than 500 reports concerning illegalities and irregularities in the electoral process.

Transparencia por Colombia used the Cuentas Claras (Clean Accounts) software to promote transparent elections. Many candidates to mayor and governor used this application to report on their campaign income and expenditures. In addition to being formally adopted by the National Electoral Council as the official accountability application for election campaigns, Cuentas Claras became the first tool created by a civil society organisation providing real-time information to citizens regarding the origin of election financing, which is key to casting an informed vote.