Wishing you a year filled with integrity

19 January 2012 in Accountability, Measurement and Research

A New Year greeting sent by a friend reads “a wonderful 2012 filled with integrity”. A sensible wish for the year I felt, in the circumstances we live. Conventionally I could get what he meant. Yet deep inside it unravels a challenge associated with it: defining the parameters of what integrity means. The ultimate meaning of his wish could have fathomed with a relative ease if he wished a year free of corruption: a year free of abuse of entrusted power for personal gain. Or a year filled with good governance: a year where transparency, accountability, responsibility and other related principles are well respected and honoured through practice.

Once a friend asked me whether I find Canadian comedian Russell Peters’ jokes racially or otherwise discriminatory. My legal training prompted me the answer: we need to look at the motive. I doubt that Russell Peters uses what he says to discriminate or demean anyone. Being a Sri Lankan, I myself once laughed at his jokes on Sri Lankans. So his intentions may be nothing else than triggering humour. 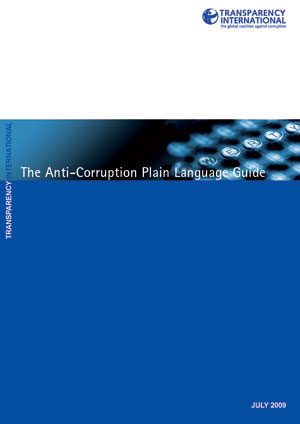 Transparency International's Anti-Corruption Plain Language Guide defines terms such as "Integrity" and others which are commonly used by the anti-corruption movement. The Guide also includes practical examples of how TI approaches these issues.

But my friend had a different opinion: “There is another side to this. This man’s jokes reinforce the stereotypes. What about kids who listen to his jokes. It shapes their thinking. If these kids one day as adults  confront a situation of making a decision of final selection of an intense competition, let say the two top candidates of an interview are of the same quality and calibre, would these deeply imbedded stereotypes make a contribution in eliminating one candidate over the other?”

During the launch of a survey on corruption conducted by Transparency International in the Maldives, a person in the audience commented that people in Maldives have a limited understanding of corruption. She said for many corruption is bribery and people engage in corrupt practices such as nepotism or favouritism out of sheer ignorance. I could not agree more. In cultures where personal relationships are nurtured and valued beyond professional conduct and standards the wholesome of being non corrupt is often failed to be understood.

The Oxford dictionary defines integrity as “the quality of being honest and having strong moral principles/ moral excellence or wholeness or soundness.” Many would find it difficult in extending this definition beyond professional lives and conduct given its emphasis on morality. Yet could fundamentals of anti-corruption exist in a vacuum? My mind runs to a discussion I had with a colleague.

I was part of the task force which contributed to the content of Transparency International’s 2015 strategy. The point of contention in one of the heated discussions was the territory of integrity. Some preferred an official recognition by Transparency International of both personal and public integrity as elements of a value that the institution intended to promote. Some vehemently opposed claiming that no institution holds the right of defining morality of personal lives of citizens.

During the tea break my Argentinian colleague reaffirmed his take on the issue: no institution has the right to peep into the bed room affairs of individuals. I varied with mixed thoughts titled towards both sides. If one cheats on his/her spouse/partner that would be an issue of integrity though clearly it would not fall within the definition of corruption unless otherwise qualified based on the circumstances of the situation.

This article was first published in the newspaper Ceylon Today. TI Sri Lanka recently organised an exhibition to foster awareness of ideas like integrity.

meals, buying clothes, gifts and even being an emotional support at certain instances for others with the motive of reciprocal allegiance in potential circumstances in the professional environment.

These practices may not lead to a situation of bribery, fraud, misappropriation, concealment of information or kickback to qualify as practices of corruption. Yet they associate with an element of dishonesty. Wouldn’t a person who engages in such dishonest practices (may that be cheating on your partner/spouse or fake sympathies) have a higher propensity of engaging in corrupt practices? In another scenario could a person be a non-believer of fundamental values of human rights such as equality, justice and non-discrimination and yet be non-corrupt or abide by principles of good governance? Would non-believing in these principles or an act against such fundamental values create a ground to be corrupt? Finding the answer to these questions may need a larger discussion and a reflection within.

Integrity is a value, not a theoretically explainable concepts such corruption or good governance. I myself hold no right to be judgemental over people on moral standards in the conduct of their lives. Yet we often need to reflect the impact of our personal conduct on our public lives. Because after all it is our personal thinking which shapes out professional conduct.

Read about the different types of corruption and what we mean by them here. What does integrity mean to you?