Power failure in Zimbabwe – taking to the street against corruption

***Since this blog post was first published, the text has been modified to note that the date of the march was moved from 24 March to 31 March***

In Zimbabwe, corruption is a daily burden all citizens have to carry: be it the bribes they pay or the disastrous public services they receive. 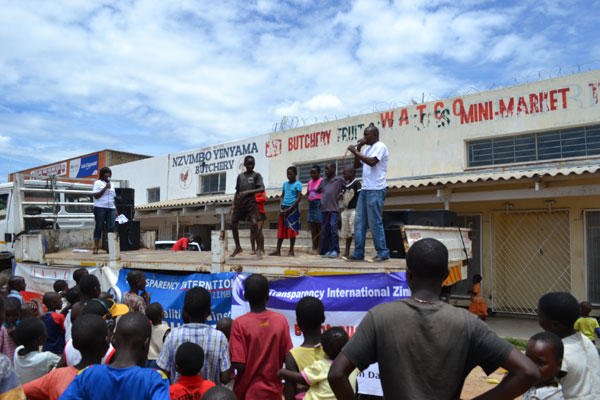 The “Electricity for all: ZESA give us light” road show at a Harare shopping centre in February drew more than 400 people.

Last December, when most families around the world were preparing meals for their end-of-year festivities, more than a million Zimbabwean families had a miserable holiday without electricity. The wet weather made it even worse that power was unavailable because the availability of firewood, the main source of energy for cooking and heating, ran low.

This was the last straw for many communities, who decided that enough was enough and asked us – Transparency International Zimbabwe – to help them draft a petition  against corruption, mismanagement and poor service delivery in Zimbabwe’s only power company, which is state-owned.

This petition is a call for the eradication of corruption and for the improvement of services offered by the power company. More than 2300 people have signed it so far, and we hope that more than 3000 people will sign it before the campaign culminates on 31 March, when we call on citizens to demonstrate against the lack of transparency and accountability in electricity supply.

Power failure is a regular problem. Most households in Zimbabwe go for days or even weeks without electrical power for domestic use. Rolling blackouts have been ongoing for the past 10 years. However, the year 2011 witnessed an increase in blackouts, usually plunging the whole nation into darkness for up to ten hours a day according to news reports, and with high bills thrown into the bargain.

The lack of power has dealt a heavy blow to the economy, forcing companies and banks to shut down temporarily if they cannot run generators, leaving farmers unable to operate irrigation equipment when vital crops such as wheat need watering, and worse still, disrupting or delaying operations in medical centres. 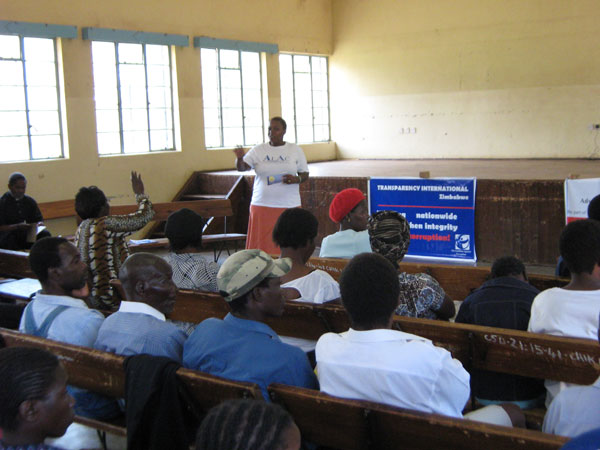 One Community Meeting was conducted in Kuwadzana, a high density suburb, whilst one publicity roadshow was conducted Epworth Township, in Harare. Women, who bear the brunt of power shortages, were most vocal.

After several fruitless efforts to engage authorities and ask them to solve the electricity woes, communities came to our legal advice centre. After we hit the same brick wall with the company, we started holding community meetings in various communities across Zimbabwe to hear what citizens have to say. At these meeting, residents constantly bemoan the poor service delivery by the sole power utility in the country, Zimbabwe Electricity Supply Authority ZESA).

Particular sore points were the frequent power cuts and the high bills that are charged, even when communities spend days without power. These bills have led residents to believe that they might be subsidising other people’s electricity usage.

Some residents expressed concern over the billing method used by the electricity company, which they fear records the amount of power they used incorrectly: stripping them of their hard earned money.

To make matters worse, it has become the norm for citizens to replace transformers when they break, yet it is the duty of the electricity authorities to replace faulty equipment if it serves an entire community.

Residents claimed that some workers from the power utility company demand bribes to not disconnect the electricity from households who have not paid their bills. Grand corruption cases were also cited in the administration of the millions of dollars in electricity bills that are handed over to the power utility every month.

What do citizens want? In our meetings, citizens said that they want ZESA to speedily install prepaid meters so that they know they are not overcharged, and they want support for their demands that ZESA provide adequate services.

To date, we have succeeded in fighting and resisting corruption when we mobilise collective effort from the community.

Citizens will march to ZESA on 31 March and deliver the petition. The rise to action by Zimbabwean citizens is an indication of a society which has been awakened to the meaning of social accountability and is eager to be directly engaged in monitoring public service delivery through denouncing, sharing and speaking out against corruption. 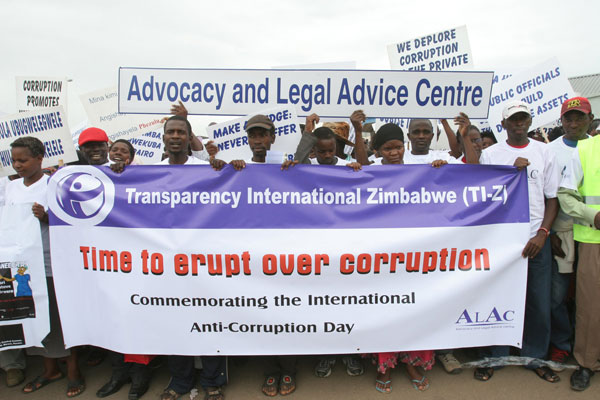 Marching against corruption on anti-corruption day. 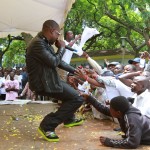 The audience go wild for a singer at our Anticorruption Day concert. 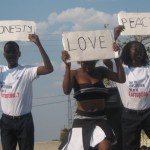 People must demand the eradication of corruption themselves if change is to be sustainable. 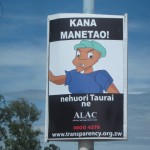 Transparency International has legal advice centres (ALACs) all over the world where citizens can report corruption and get help for free.