From Banana Revolution to Gorilla Election

Under the shadow of the biggest corruption scandal in Slovak history, the country’s parliamentary elections on 10 March offer the public an opportunity to get rid of old methods of doing politics in Slovakia.

When Iveta Radicova’s government lost a vote of no confidence in the Slovak Parliament over the issue of EU’s bailout fund last October365 all political commentators predicted that the election campaign’s main issue would be Greece’s bailout and the Eurozone crisis. Then a corruption scandal broke. 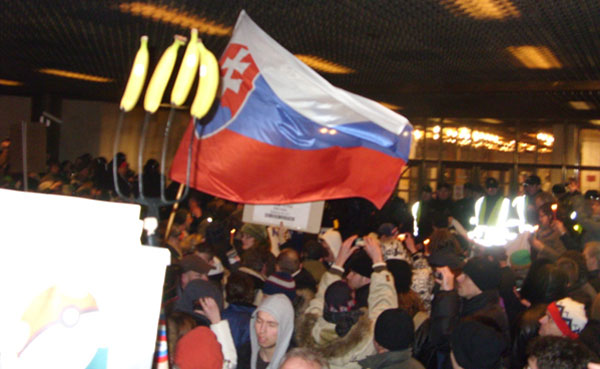 Over Christmas, someone – we do not know who – leaked a wikileaks-style “Gorila file366. The file, allegedly produced 367by the Slovak secret service, included summaries of wiretapped regular conversations 368between Slovak politicians, top public sector officials, and big business people, which allegedly took place in a flat owned by a former policeman. The flat is believed to be one of several used for such meetings, but it happens that a member of the Slovak secret service living next door noticed a lot of expensive cars rolling up, and alerted his boss.

The 100-page document, which describes the last years of the second Dzurinda369 government (2005-2006), shocked the Slovak public in an unprecedented way.

27 per cent of Slovaks have been asked for, or paid, a bribe, according to a new EU survey370. A third say that many people accept corruption as part of daily life.

The name “Gorilla” (“Gorila” in Slovak) was thought to come from the software used to leak the tapes, but was actually the codename given to the wiretapping operation, since the alleged owner of the flat 371was known as “gorilla372“.

These are all allegations revealed by journalists, yet still to be confirmed by the authorities. But the press reports still triggered massive protests.

What made people really angry this time was not the scale of political corruption, but the sheer openness and clarity about the brazen way politicians and businessmen collude which was provided by the leaked and still allegedly official Slovak secret service’s document. A lot like the impact of wikileaks in Tunisia373 last year. 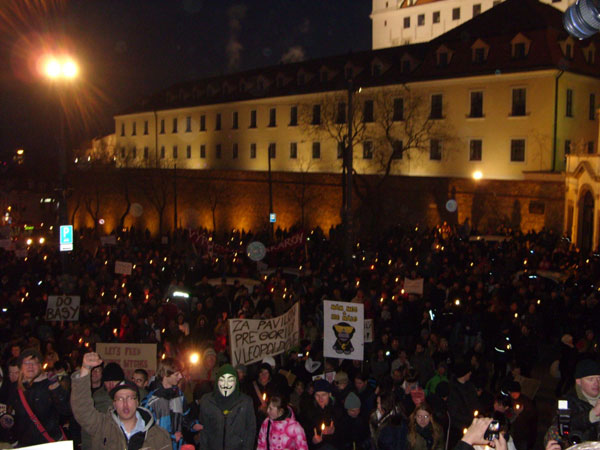 Protests in central Bratislava. Some protestors were seen to dress up as gorillas.

A month later, on 27 January, the first popular mass protest was organised by independent young people who had spontaneously gotten together through Facebook.

A week later, 10,000 people demonstrated in Bratislava: perhaps the biggest mass protest since the anti-Meciar protests374 during the 1990s.

Other Slovak towns also had their town protests on the same day or in the following weeks. Other protests followed but they have not come anywhere close to the scale of those of February 3rd. The protests have died down, but the message has spread nevertheless.

However, if it had not been for a Canadian investigative journalist, Tom Nicholson,377 who came to Slovakia and settled down during the Meciar era, many questions would have remained unanswered and the Gorilla scandal would have been communicated differently. 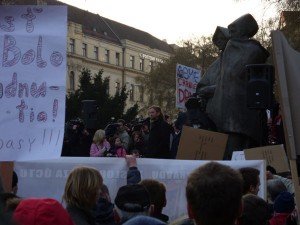 Tom Nicholson, the investigative journalist from Canada who brought most light to the Gorilla case, after it was anonymously uploaded online.

Interestingly, Nicholson has written a book on the scandal, but a Slovak district court banned it379before it could even be published, after one of the tycoons mentioned in the Gorilla filed a legal suit.

Soon after, another scandal came to light: the “Sasanka380” scandal, named after the Slovak for sea anemone, which is a play on words alluding Slovakia’s Freedom and Solidarity party. Secretly filmed 381video footage382 showed the former Speaker of Parliament and a chairman of one of the 4 coalition parties, openly discussing corruption, the election of the Attorney General and Prime Minister Radicova’s behaviour with a controversial business man who also happens to be included on a Slovak mafia list which had been leaked from the Police Force last year.

With the Slovak public sector in disarray, and public confidence in equality of opportunity and rule of law close to zero, will the next election change anything?

It must be said that the Slovak government has undoubtedly made a number of improvements during the year and a half, at least in terms of anti-corruption efforts and transparency. All public contracts are now published online, compulsory e-auctions as a means of public procurement, opening of judiciary just to name a few.

Who knows what else would have been accomplished had the Radicova government remained in power? However, the biggest corruption scandal in the political history of Slovakia has overshadowed all the good work that had been done.

Slovakia’s pillars of democracy are shaking, public morale and trust are at record low.

Nevertheless, the basic message385 of Transparency International Slovakia’s recently launched National Integrity System386 assessment says that Slovakia has a standard legal framework in terms of integrity system, but it lacks implementation skills and mainstreaming of specific integrity mechanisms across the sectors. Police Force, Judiciary, President and Public Procurement Office have scored the lowest.

However, for ordinary Slovaks, lack of jobs, standard of living, and quality of health care still remain the most crucial issues. Not open governance but pledges to cheaper bread and more jobs will (as always) decide the election.

Will the gorilla scandal change anything? In a few days (and for the next four years), people, not politicians, will decide that. Right now it is public pressure, and not politicians, that keeps the issues of government transparency and fight against corruption alive.

This is not the first time scandal hits Slovakia. In 2009, journalists uncovered corruption in the trading of “carbon credits”. Read more.