Popcorn. Cola. Love. Betrayal. Tears. Laughter. A collective gasp from the audience as a local heartthrob appears on screen. A unified “uh-oh” as one of the characters is about to discover her husband’s love affair. Tears as some parents have to make agonising choices about their children. The stars of the film waiting outside to sign autographs and talk. A typical evening at the movies as part of Jakarta’s vibrant nightlife? Not a bit of it. 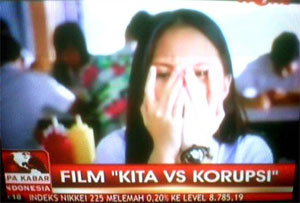 The audience packed into the Epicentrum XXI cinema in Jakarta last Tuesday evening were there to watch four short films about the pernicious and devastating impact of corruption on people’s lives. The films, which are proving something of a hit and are being shown to groups all over Jakarta, have been made by young Indonesian directors and star some of the country’s most famous actors, such as Nicholas Saputra and Revalina S. Temat. But it is not only the stars which are the attraction; the theme resonates with the audience in a country with the fourth largest population in the world and a corruption problem almost to match (Indonesia ranked 100th on Transparency International’s 2011 Corruption Perception Index).

The first of the four films is a story of a local official in cahoots with a construction company and betrays his loved ones and community in pursuit of his own personal gain. The second focuses on corruption within the education system and the resulting destruction of a family. The third one is a moving story of how a parent refuses to accept bribes even when the health of his child is threatened. The last one is a funny, quirky – and somewhat brutal – portrayal of the effects of a ‘get-rich-quick’ mentality on a group of school girls and their families and how this fuels corruption.

While all of the films are deeply challenging to the audiences, they also have a central and uplifting message of hope. They demonstrate that individuals, communities and groups can successfully take action against corruption; that corruption is not inevitable. The films cry out for us to view those who resist corruption – even if on a small scale in our everyday lives – as the real heroes. They explore how participating in corruption is, in most cases, a choice. While exercising this choice in an ethical way is not always easy, doing so creates a society more prone to integrity, honesty and justice, as well as leaving intact the dignity of those who do so. Not only that, but for the audience on this particular night (the staff of one of the world’s leading oil services companies), the message from their management was also clear – it makes good business sense.

To organise a showing for your group or company or to make a donation to the work of TI Indonesia, please contact Mr. Teten Masduki, Executive Director of Transparency International Indonesia.