What can Slovenia learn from New Orleans?

11 May 2012 in Americas, Europe and Central Asia, Poverty and development

Hurricane Katrina was a dark hour for New Orleans, costing the lives of thousands and displacing an entire city, but in terms of community relations and the fight against corruption it has certainly had a silver lining. How can Slovenia learn from the resurgence of that city, to bring about change and reconciliation? 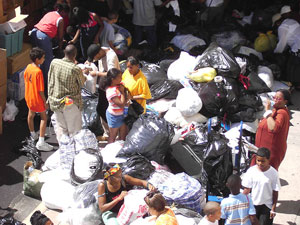 Integriteta- Transparency International Slovenia – recently hosted an American professor from New Orleans, Dr Michael Cowan, also a founder of Common Good, a network of civil society leaders, which has been one of the key groups driving the broad reform of public institutions in the city after Hurricane Katrina. In a lecture entitled “Institutional Reform, Economic Opportunity and Social Trust in Post-Katrina New Orleans” he spoke mainly about corruption and the social and ethnic stratification (racial and socio-economic divisions and asymmetry of power) of New Orleans prior to the tragic destruction caused by Hurricane Katrina and how the situation changed in its aftermath. You can listen to the lecture here.

In the lecture he pointed series of parallels that could be drawn with the current state of Slovenian society and politics. Some comparisons are particularly interesting:

1.       Socio-economic and ethnic gaps  in New Orleans vs. political stratification of Slovenian society

New Orleans is a city where socio-economic divisions often  fall along ethnic lines, driving many social problems. At the same time, though, citizens from all backgrounds face similar issues and share concerns about the future. And many, within these different communities, in fact in favor some form of cooperation. The reason this sort of cooperation has not materialized is a broad lack of trust between the groups. Overcoming this distrust would go along way towards eliminating social and economic inequities.

The similar pattern of distrust and failed cooperation can be observed in Slovenian society and politics. As a nation we are strongly divided along political lines, especially when discussing the fate of the fallen socialist regime here. This has a strong influence on the social discourse, especially when the topic is constantly raised and instrumentalised by political elites. This reinforces the opposing positions among citizens, deepening the sense of economic, political and social crisis in Slovenia. The consequence is an inability to reach agreement on the critical social issues facing the country, which concern everyone. Broader social consensus remains elusive.

2.       No relationship between government, business sector and civil society

Prior to the Hurricane, there was weak cooperation between government and business in New Orleans. The lack of trust between these groups was so profound that they were unable to work together for the good of society. After the hurricane civil society and business began cooperating and catalyzing cooperation between public institutions. This had a significant and positive impact on the process of rebuilding the city, and in improving the general atmosphere in the community.

The current situation in Slovenia can be compared in some ways to pre-Katrina New Orleans. The recent Slovenian National Integrity System Study, for instance, showed that the relationship between government and the private sector is deficient in many ways. The dependence of business on those in power has nurtured a corrupt relationship marked by phenomena such as the “revolving door”, state capture, and incentives to take undue political influence. Cooperation between the government and civil society also remains quite weak. This reinforces the status quo, which also reflects a lack of political will. Government has also failed to help broker a stronger bonds between business and civil society. As a result, cooperation between these three players towards achieving goals in the common good remains negligible.

According to Dr Cowan, “The city was destroyed even before Katrina. Corruption wasn’t something you would talk about, because it was so deeply rooted in politics that people would just smile if you mentioned it. The waste and corruption were everyday life in the heart of Louisiana”.

Given the level of corruption and the destruction wrought by the massive flood, it was not clear whether the city of New Orleans would even be rebuilt. Civil society and business pushed for the establishment of an Office of the Inspector General with the goal of fighting corruption and waste. Initially, government resisted, but eventually embraced the idea. This would have been unimaginable before the Hurricane. Changes for the common good in New Orleans have been tremendous. The creation of the Inspector General represents a huge step forward in corruption prevention.

The country direly needs consensus on social issues – and political differences must be put aside for the common good. The question is whether it will take the kind of tragic shock that brought New Orleans to its knees in order to achieve this.