15 May 2012 in Africa and Middle East, Asia Pacific, Poverty and development

In India more than 200 million people live without secure access to food, the most of any county in the world, the Wall Street Journal reported last month. As the report argued, this is not because India lacks the resources to provide for its population. On the contrary, India’s domestic food production would be more than enough to feed its population of 1.2 billion. However, a lack of adequate infrastructure to transport and store harvested crops results in significant losses. And according to the Wall Street Journal report, corruption and inefficiency are among the main reasons why infrastructure in India is lagging behind, thus slowing down investments that could help feed millions. 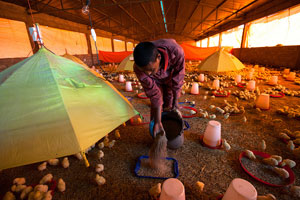 Food security, especially in Africa, will be one of the main items on the agenda of the G8 summit this month in Camp David. This is welcome news as the countries with extremely alarming Global Hunger Index scores — Burundi, Chad, the Democratic Republic of Congo, and Eritrea — are in Sub-Saharan Africa, according to the International Food Policy Research Institute. These are the same countries that score at the bottom of Transparency International’s Corruption Perception Index. If corruption is a significant factor in India’s quest for food security, it is likely to be a factor affecting food security in African countries, in addition to civil unrest and other factors which undermine security.

Read the full article on the huffingtonpost.com