Greece: corruption and the crisis

Last month, Greeks went to the polls after two years of ceaseless crisis. After a vote that showed their frustration with the old regime and their desire for change, the question now should be how to tackle the rampant corruption that has driven a wedge between a people and their leaders.

One answer is transparency. It is high time Greek leaders championed that cause. They could start by setting a good example at home and make politics more open. We have been waiting too long for reforms obliging political parties to allow voters to see their accounts and contributors.

This Wednesday, Transparency International issued a report on corruption in Europe, based on research into 300 national institutions across 25 European countries. The report shows how a failure to keep management of our economies transparent, and hold the managers to account, opened the door to the economic crisis we now face. It will show that Europe needs to do better at fighting corruption to emerge from the crisis, and prevent the next one.

Here in Greece, our research, we found the ombudsman best equipped to combat corruption thanks to a clear mandate 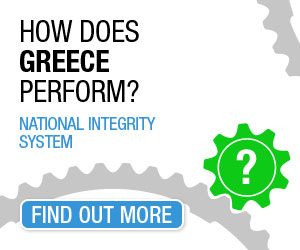 and a well-trained, well-funded staff.

The problem is that other institutions – politics and business especially- do not meet that standard. Decades of secrecy and impunity in government have caused a “crisis of values”. People in Greece have seen too many powerful people break the rules and get away with it.

Today there is a strong impression the corruption among the country’s elites is rarely punished. Only one Greek in ten thinks there are enough corruption prosecutions or strong enough punishments, according to an EU survey.

According to government data, one civil servant in fifty ever faces disciplinary procedures. One way to end impunity for corruption and demonstrate it publicly would be to merge existing agencies into a single anti-corruption body.

This helped Hong Kong clean up its public service in the 1970s, leaving it eleven places from the “most clean” position in Transparency International’s Corruption Perceptions Index. Greece sits 78 places further down that ranking – behind only Bulgaria in the European Union.

Unless the Greek government, and its big creditors the EU and IMF, start taking this score seriously no amount of bailing out will keep the Greek economy from sinking.

This March saw some action taken: a minister faces charges that he received millions to approve arms purchases, a €170 million settlement of bribery charges with German industrial titan Siemens and the arrest of two officials and suspension of a hundred more for suspected bribe-taking. That is just a start of a deep reform and a tougher approach to rule-breaking that is needed.

The Siemens case cost the country an estimated €2 billion. It involved the bribing of government ministers. But a politician’s corruption trial cannot take place more than five years after the crime, a fact pointed out by the lawyer of the minister facing charges. This means a seat in parliament is effectively a ‘get out of jail free’ card.

Greece’s companies also have to change. If there were strong rules obliging businesses to open up, especially on their tax liability, then we would avoid the current situation where only companies listed on stock markets display any semblance of transparency. Bribery and the tax evasion it facilitates exposed the country to its present debt crisis, with $160 billion of black money leaving the country over a decade – a little less than the latest bailout.

The corruption drives a problem endemic in society. The average price of a bribe in Greece is $1856. If you want to cut your tax bill in Greece, the bribe will cost from $130 and $26,000, according to a national survey from Transparency International-Greece. If a doctor wants a fakelaki (small envelope) to carry out your medical test, it could cost between $40 and $660.

Moving public services online would close avenues for fakelaki. We also need more transparency where the big envelopes are likely to change hands: government spending. A national law should be passed obliging public bodies to run public tenders with open bidding and third-party scrutiny to prevent waste and abuse in public spending.

Nevertheless, the root of the problem is that in several instances, Greek law effectively condones acts that should be punished. Built a house without planning permission? You can get it approved later. Failed to file all your accounts this year? You can pay a charge and avoid the taxman.

This will make it difficult for the leader who inherits the cost of two massive international bailouts to ask Greek citizens to bear the cost of paying off creditors new and old.

Election season offers a chance to convince Greeks that corruption is no longer the norm.

We have called on Greece’s political parties to commit to transparency steps already practised in other countries, such as public disclosure of assets and a code of ethics for politicians. So far only one party has responded.

The Greek crisis will only end when the crisis of values ends, and that will only happen when Greek leaders take the lead in making transparency the norm in Greek government and society.