It is increasingly recognised that corruption can only be tackled effectively through the joint action of all stakeholders, i.e. the public sector, business and civil society. There is a growing trend to include the private sector in development initiatives to ensure that it becomes part of the solution rather than being part of the problem. But can companies that are driven by short-term business interests really be part of the solution to corruption? And can multi-stakeholder groups made up of actors with very different aims and approaches really lead to effective solutions?

The Group of 20 (G20) leading economies, first convened as a forum to tackle the global financial crisis in 2008, is responsible for 80 per cent of world trade and more than 80 per cent of [global] gross national product. The private sector seized the opportunity to represent its views vis-à-vis the G20 early on. The first Business 20 (B20) Summit took place in parallel to the Canadian G20 Summit in 2010. Issues discussed at the B20 Summits included corporate social responsibility, employment, food security and corruption. 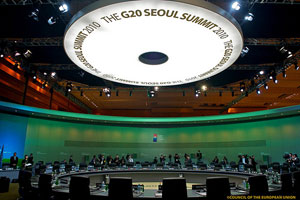 Civil society groups, including Transparency International, have been following the G20 process and emphasizing that a lack of integrity, transparency and accountability by both public and private actors significantly contributed to the global financial crisis of 2008. From the start, we have called for civil society to be at the table and for the G20 political process to be more transparent and accountable.

Read a letter sent by the B20 Anti-Corruption Task Force to G20 leaders emphasizing the importance of progress on anti-corruption.

Earlier his year, TI was invited to join the Business 20 (B20) Task Force on Improving Transparency and Anti-Corruption after the Mexican G20 Presidency pressed for civil society participation in the B20 process.

It turned out that we do have some joint objectives with business such as the extension of the mandate of the G20 Anti-Corruption Working Group beyond 2012. In addition, we were able to help shape recommendations on anti-corruption for small-and medium-sized enterprises (SMEs) which we formulated together with the International Chamber of Commerce. Some of those recommendations call for Governments to require that SMEs ‘represent’ that they have adequate anti-corruption programmes in place as a condition for participating in public procurement and for Companies to engage SMEs through their supply chains and provide them with concrete support in the adoption of best practices in resisting corruption. Furthermore, we successfully advocated for the inclusion of the recommendation to ensure citizen participation in public procurement processes through the use of new information technologies. Finally, we agreed on language to formalise the dialogue between government and business, including “international governmental and on specific issues non-governmental organisations”.

Of course, such engagement requires compromise, and we were disappointed at business resistance to agreeing to enhance corporate transparency through country-by-country reporting on profits and payments or the lack of an explicit monitoring role for civil society in sectoral initiatives. Nevertheless, overall, it was a worthwhile and fruitful cooperation. Hopefully governments will now acknowledge our work by taking up some of the B20 Task Force on Improving Transparency and Anti-Corruption recommendations in the Communiqué of the 18-19 June Summit in Los Cabos. The B20 Anti-Corruption Task Force has sent a letter to the G20 leaders emphasizing the importance of progress on anti-corruption.

Business and civil society often have very different objectives on many issues, but on others they can join forces.  In fact, it may be the only option if they really want to tackle the scourge of corruption and its negative impact on development.